YOU HAVE TO AGREE TO THE USE OF COOKIES TO BE ABLE TO PURCHASE AS A GUEST.
Food & Wine, Tastings

A dinner with Bastien Tardieu at 28-50 Fetter Lane

Article written by Will Hargrove, our Head of Fine Wine. Find out more on his blog

This dinner ten days ago was one I had been massively looking forward to. I love the wines from The Tardieu family. 28-50 Fetter Lane did a really great job of hosting the dinner, efficient but understated service and cracking food – menu below!

You can see some other Tardieu-Laurent posts that show the range of the wines. This family firm with father and son team of Michel and Bastien at the helm on the wine side just do a great job. They work with, often in the vineyard as well as cellar, a whole series of producers from Condrieu to Bandol. Producing about 80% reds and 20% whites. They are just what a quality focussed micro-negociant should be. The firm started in 1994 and the 1994 and 1995 vintages were aged in Burgundy (hence the “Laurent” bit) and then from 1996 onwards in Lourmarin where they are based now.

We started this evening with Condrieu 2015 as an aperitif. Now I don’t really “do” Viognier in the same way that some people don’t like pistachio ice cream (they are insane) but this I did like, and not just because I am biased. Full rich texture but a good bit of acidity and a nice oak integration, I imagine this doesn’t see much new oak. It worked well as an aperitif but has plenty about it to be a great food wine. Bastien said it was from a new producer to them, based in Vernon with a parcel facing full south and on thin soil.

It was then time to be seated. 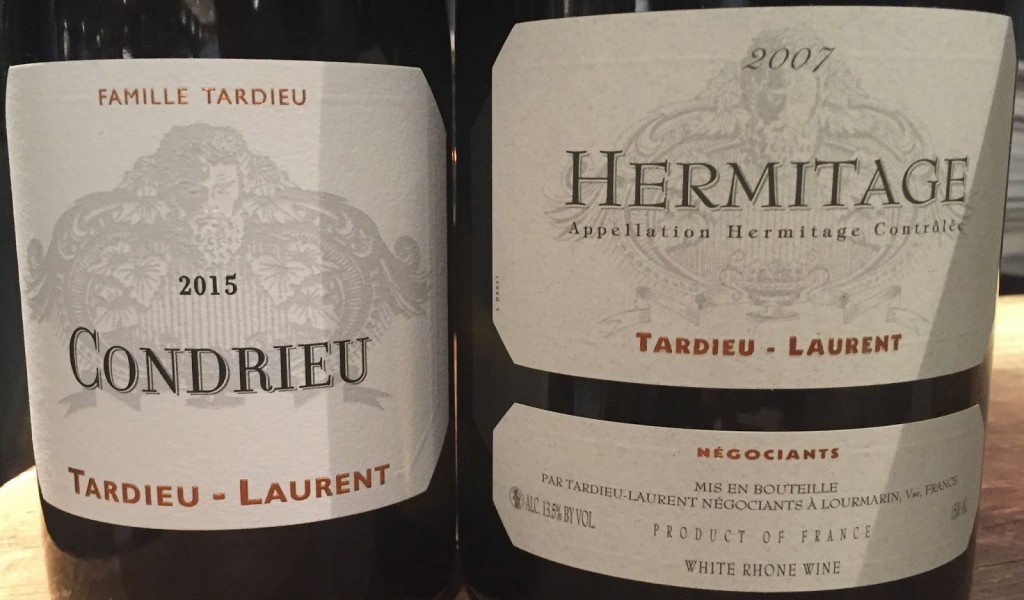 As Bastien said a few words we were served the Hermitage Blanc 2007 en magnum. This was a real star of a wine. This sees 24 months in oak but not much new. One of the key aspects to this wine being the fact that it is possibly the most long-lived of all their wines. One important point of the ageing being that it is done on the fine lees, Bastien noting that this is crucial to the character and complexity. There is a lot going on here, waxy with notes of petrol and pear then lanolin and beeswax, a rich wine but not heavy, more intense than heavy, a little white truffle…splendid just splendid.

As we moved from Terrine to lamb (which was superb) so we moved to reds, all from magnums:

Gigondas 2004 en magnum this is from a higher part of the Gigondas area known as les dentelles, meaning silk or lace as opposed to teeth as one might think. It is an area known for grace and elegance. As an aside, if you get the chance to go to Gigondas then go. It is a beautiful village and has a great restaurant – Oustalet – as outlined in this trip. Back to the wine, this is perfect now, good slightly degraded character and nice earthiness to combine with red back fruits.

Châteauneuf-du-Pape Cuvée Spéciale 2006 en magnum what a wine this is. Year in, year out I love this. 100% Grenache (“as Chateauneuf should be!”), made with 100% whole cluster from 100year+ old vines in La Crau on a sandy soil (only really shared by Rayas, La Crau and Pignan). There is no pumping over, it is what Bastien described as a tea-bag wine. The colour, as Grenache should be, is not too deep. There is an extremely elegant freshness to this wine. I just love the poise and balance, the slight white pepper but mainly the redder leafy fruits. Spot on. All this from a decent, but not more than that, vintage. I have some mags of 2010 but Bastien made me promise I will leave them for a while.

Côte Rôtie Vieilles Vignes 1999 en magnum drinking a wine that is special for a particular reason is always great. The reason this is such is that it was only made in magnum and never sold. It was only the 3rd time Bastien had drunk it! Only three times have they made a Vieilles Vignes Cote Rotie and this was just 300 magnums (2 barrels). There was a “normal” Cote Rotie 1999. The nose is just classical Cote Rotie, all bacon fat and dark spiced fruit. The palate had a more ferrous feel, a savoury bite that left you wanting more. I would say it is mature now, clearly it will continue to age but is spot on at the moment. 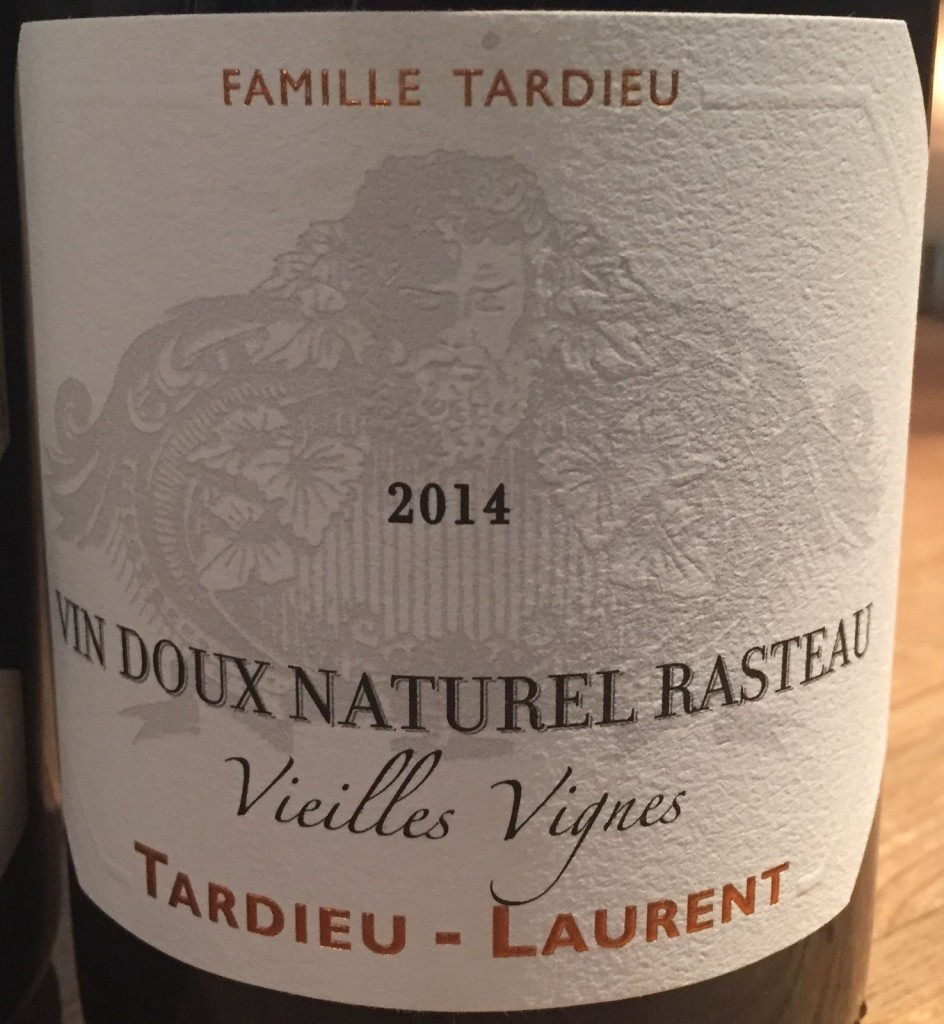 When it comes to planning dinners one of the trickier areas is the last course, especially if the producer in question is white or red wine dominated. Here we had a great option. The other “first world problem” is whether you have cheese or pudding first so we served a fortified red with cheese and pudding alongside each other.

Rasteau Vin Doux Naturel 2014 this was a production of just 600 bottles and 2014 was only the second time they had made this. The only Rhone village that has an official appellation for Vin Doux Naturel (or Rhone Port as we simplified it to on my table) is Rasteau. This village, 50 years ago, made almost exclusively VDN. The vines are 80 years old. There is an insane drinkability to this, I am delighted that I bought some. It is redder in fruit than Port, elegant, more drinkable in volume at an early stage, also “only” 17% rather than 20%. Splendid!

And that was it really…a thoroughly enjoyable evening, Bastien throwing great nuggets of information into the mix and everyone just getting stuck in. Wine as it should be… 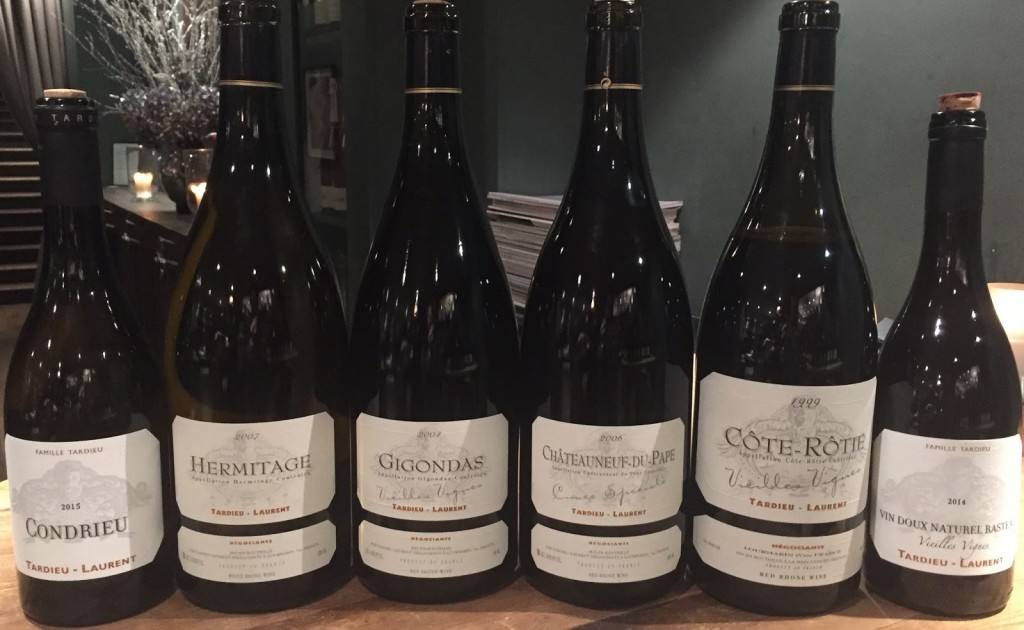