YOU HAVE TO AGREE TO THE USE OF COOKIES TO BE ABLE TO PURCHASE AS A GUEST.
Burgundy, Fine Wine, Producers, Tastings

A very special occasion: A dinner with Bonneau du Martray 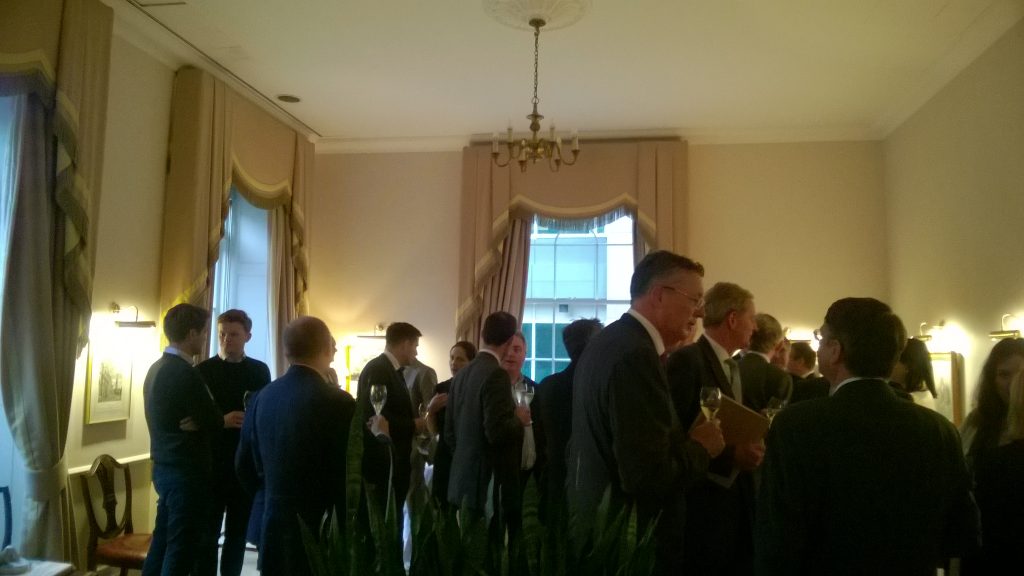 Last’s week dinner with Bonneau du Martray was a very special occasion. The wines are among the most magical whites produced in Burgundy, Jean Charles is among those gifted winemakers that is able to communicate the magic of soil and vines and there is a changing of the guard at Bonneau du Martray. The dinner was held ‘at home’ (which means at 1 Thomas More Street), which was a rather appropriate place to celebrate our long relationship with the domaine at this quite emotional occasion. Jean Charles explained his vision for the Bonneau by saying “My aim has always been to make wines that reflect where they came from. I clearly hope that they do”.

Today Bonneau du Martray is the only Burgundy estate that solely produces Grand Cru wines and unusually for Burgundy, all the white wine vineyard is in one continuous swatche of vines. The Bonneau du Martray vineyard straddles the borders of En Charlemagne and Le Charlemagne (the heart and best parts of the appellation) on hard limestone with rocky outcrops that can easily destroy plough and horse. As with any great wine estate, the old adage is true that great wine is the magical result of great soil plus great vines plus great people. Historical domains like Bonneau du Martray also remind me about the transient nature of life. After more than two centuries the Le Bault de la Morinière family have handed the reigns to a new owner Stan Kroenke and a new chapter will start at the domaine.

The commune of Aloxe Corton traces its history to early Roman times. In the 3rd Century AD is was known as Aulociacum (which evolved over the years to Aloxe and added ‘Corton’ in 1862 in honour of its famous vineyard). The earliest mention of vines being planted on the hill of Corton are in 696 and by the 8th century, the hill was owned by emperor Charlemagne, who bequeathed his name to the vineyards when he donated a large part to the Abbey of Saulieu in 775. Originally planted with red grapes, legend has it that the hill of Corton was planted with white grapes on the orders of Charlemagne as his 4th wife Luitgard forbade him from drinking red wine to protect his white beard from being stained. Unwilling to give up drinking his beloved Corton-Charlemagne, he ordered white grapes to be planted on the hill.

Fast forward to the French Revolution and soon after the Ventes des Biens Nationnaux, the Very family (who founded Domaine Chanson) bought the Clos Charlemagne plot. In 1835 Eugenie Very married Charles Bonneau du Martray and thus the name was found. In 1969 Comtesse Alice le Bault de la Morinière inherited the Domaine from her uncle (and godfather) René Bonneau du Martray. Her husband Jean dedicated all his free time to the estate and restored the property, rejuvenated the winery and introduced estate bottling. In 1994, their son Jean-Charles took over the reigns at the domaine. Giving up a successful career as an architect, he dedicated his life to Bonneau du Martray. One of the first things he did was commission a soil survey and discovered there were 9 different soil types. These, together with different vine ages, means there are 15 different parcel vinifications for the whites and 2 for the reds. In the vineyards, he oversaw the introduction of organic and biodynamic principles and introduced a sélection massale to preserve the patrimony of the vineyard. Meanwhile, a few important changes in the cellars have fine-tuned the wines, including the introduction of natural yeasts and barrel fermentation.

Introducing the first two wines (2011 and 2009) Jean-Charles said ‘One was a difficult year, one was a year of joy’. He continued ‘as farmers, and we are farmers, it was scary’. As an example he reminded us that everything was in advance (in fact flowering was earlier than in 2003) and then a hailstorm on the 20 May that lasted 1hour and 40 minutes’. 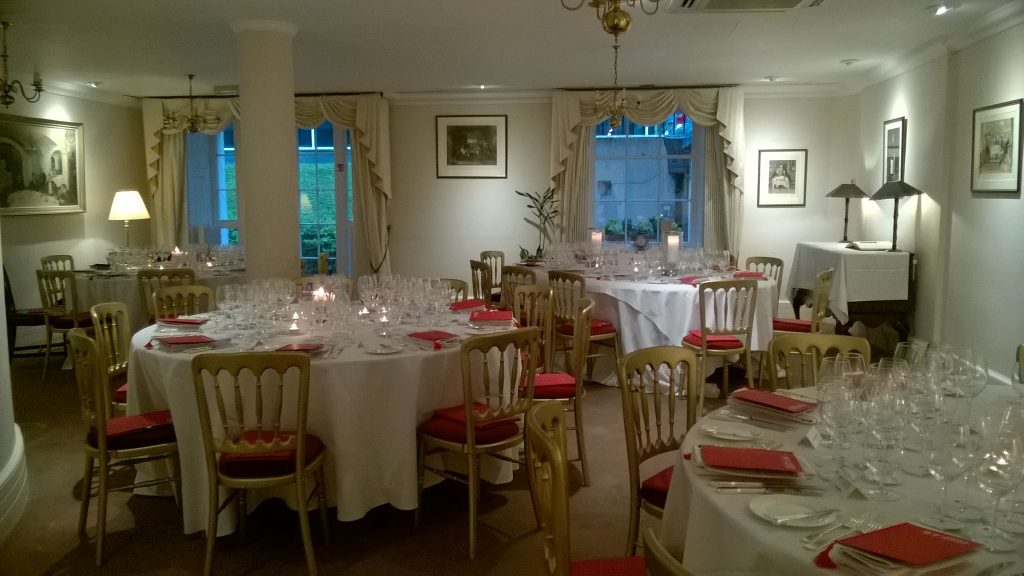 Served with Fillet of Turbot, served with celeriac, crisp clams and celery cress.

In the glass the 2011 was obviously paler than the 2009 (which has a wonderful golden hue) and it has a real finesse on the nose. The finesse and complexity of the nose continued on the palate. It was gentle with very primary aromas of lemons, white orchard fruit, summer hay with a mineral twist. Unlike the Grand Crus of Puligny and Chassagne, great Corton-Charlemagne always has an elusive magical quality that Jean-Charles compares to the use of light in great painting and which he sees as a reflection of the unique terroir of Corton-Charlemagne. Jean-Charles summed it up beautifully as “the season was difficult for a farmer, but the result speaks for itself. It is special as it bears the footprint of the land; it is straightforward but also has a mysterious expression. They can be mysterious as they don’t have to show off. That is why I am so fond of them”

As expected the 2009 is deeply coloured with a powerful nose and palate. I am often worried that 2009 white Burgundies lack the acidity of structure to be balanced or age properly. Only a handful of winemakers succeeded in making truly great 2009 whites, but Bonneau is definitely among them. It was powerful, flamboyant but balanced by with freshness and an incredible energy. It felt like the wine was only just emerging and it clearly has a long time ahead of itself. Jean-Charles compared the vintage to 2011 by saying that “work was light. We picked in a really great and happy mood”. Addressing those of us that have been sceptical about 2009 whites (and I count myself among them), he continued “Some people said the 2009 whites won’t last, but it played a joke on us. It stayed supple for 3 years, then it stood up and showed it has a backbone” and added as an afterthought “The future (for 2009) will be great”. Our table was split between 2011 and 2009 and personally I think I may just prefer 2011 at the moment, but I expect that in a decade the 2009 will be the far greater wine. 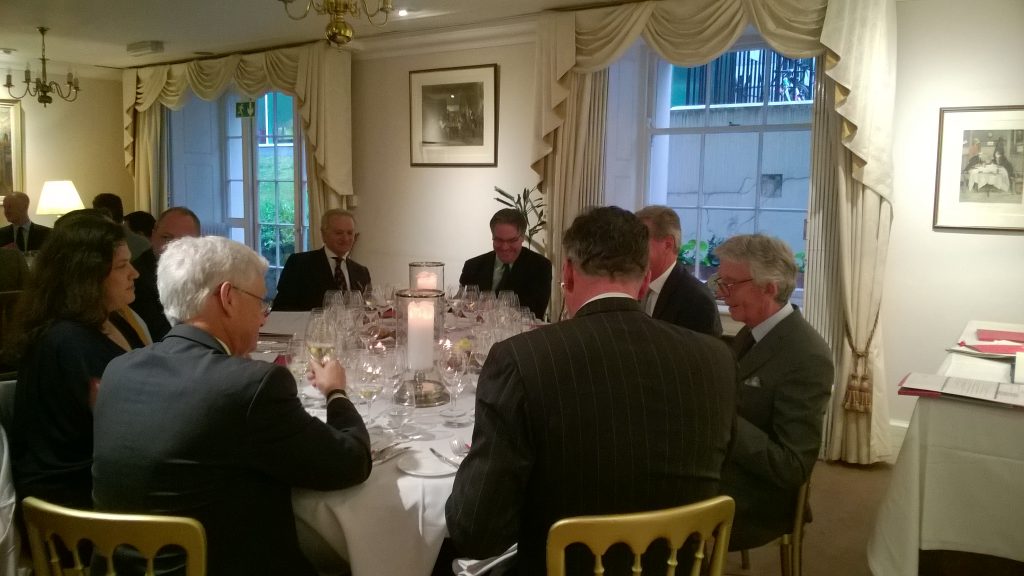 2003 Corton (en magnum) and 1992 Corton-Charlemagne were served with black leg chicken, morels and hassleback potatoes served with spinach and a red wine sauce. The red Corton comes from a 1.5ha vineyard in Aloxe Corton on deep ferruginous soils with limestone beneath. The wine is never a blockbuster but I love it for its finesse. This wine has seen a dramatic improvement under the stewardship of Jean-Charles and mysteriously shows fresh fruit aromatics even in hot vintages. Jean Charles commented about the Corton “The hill of Corton is Majestic. It is a place where there is something special. There are few places that have such a strong connection that is difficult to explain, but is very special”. It didn’t have the browning rim that I expected nor any raisined character. It does have the suppleness, melted tannins and juicy fruit of a warm vintage. If I had been blind-tasted on this, then I would have said this was about 7 years old, not 14. Jean-Charles said about the 2003 “a difficult year with enormous rot and enormous heat. We picked on 23 August. The only time I ever picked in August. The heat was so extreme that we had to pick in the mornings and evenings and we only made one vat. I recognise the 2003 by a hint of black chocolate and someone once told me that the synatise of a great vintage is a hint of black chocolate on the midpalate”

2003 Corton was followed by 1992 Corton-Charlemagne. Jean-Charles described it as a year filled with personal grief “my mother passed away in May and dad felt quite desperate. But life has to go on and we were blessed by the seasons. 1992, like 2009, was beautiful when it was young. 1992 has always had impeccable balance”. 1992 was a fabulous example of the greatness of old white Burgundy – it takes time for the wine to unfurl, but when it does, it is so beautifully. The aromas slowly emerge, there is a core of real power and the wine shows exceptional completeness. 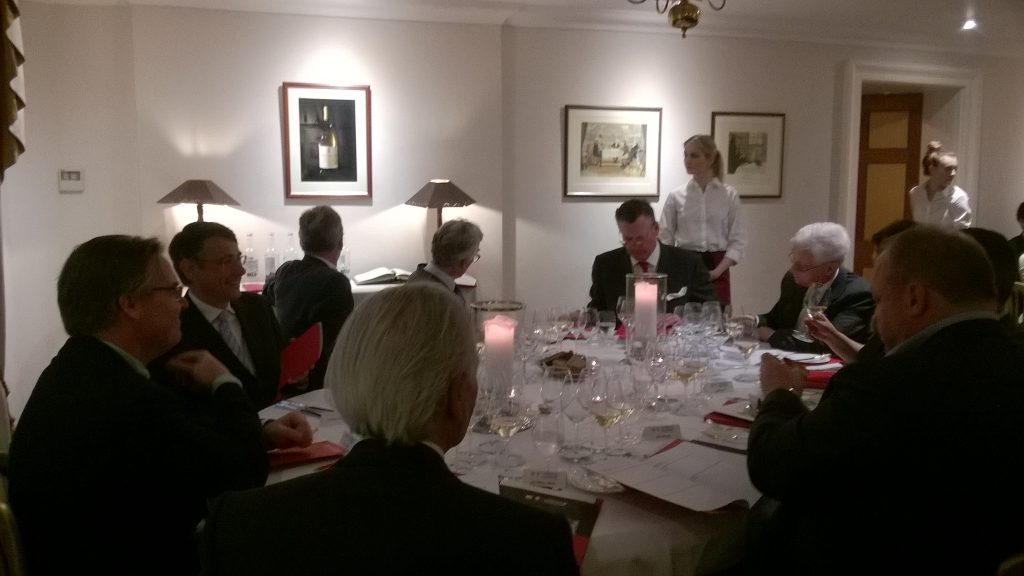 Cheese was served with 1987 Corton-Charlemagne. An incredibly difficult vintage, but great wine stand the test of time even in difficult vintages. There was some of the fragility of texture of aged white, but the core of aromatics still had a youthful edge. It comes into its own with aged Comte or aged Gouda.

Jean-Charles summed up some of the magic of wine, when he described the moment of bottling for him as a winemaker ‘When we bottle the wine, it is the end of our job. From the moment that the cork enters the wine, the wine has its own life. For me that is a very moving moment. We cannot do anything to change it. It has its own life and that is extraordinary”. He finished with a word of advice about storing wines and opening bottles. “On tasting wine, the first bottle is always infanticide, but there is always something to give at this age. Don’t open your reds early as it is always a waste, because the minerals and tannins only work when combined and that takes time. At least 10 years”. His family buys a case and opens a bottle every year or so to see the evolution of the wine as such they “ have enjoyed each beauty of each bottle”

Great winemakers are almost by definition mavericks. They dedicate their lives to watch over their domaine, they attend to their vines, they fine tune the winemaking and add their magical touch that will define the direction of the domaine for a moment in history. They are slaves to the soil, the climate and the vines and as great artists translate their vision and passion into an object that takes on a life of its own. Yet great winemakers are only ever guardians of a place. Domaines like Bonneau du Martray have a history of centuries with an average vine age of 50 years and produces wines that will benefit from decades of ageing. It was very emotional to say goodbye to Jean-Charles whose life has been dedicated to Bonneau du Martray and whose dedication and influence has been so profound. And yet, a new era is always exciting too.