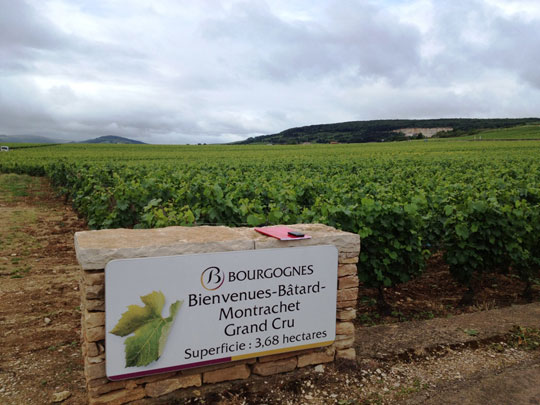 We had stayed the night (Sunday) at the quite delightful and extremely luxurious “La Masion d‘Olivier Leflaive”, which is owned by Olivier Leflaive. This was an absolute treat and a far cry from the Northern Rhône, so we were all in very good spirits indeed! So our first day in Burgundy opens up with some mild Burgundian sunshine and the excitement of knowing that we will soon be tasting some wonderful wines at our first appointment of the day (8.30am!), Domaine Matrot. We were greeted by Elsa Matrot and led to the cellars where we tried an array of fantastic wines, nine whites and four reds of which one of the whites was a barrel sample of the 2011 vintage which I may add was tremendous, as were all the wines for that matter! 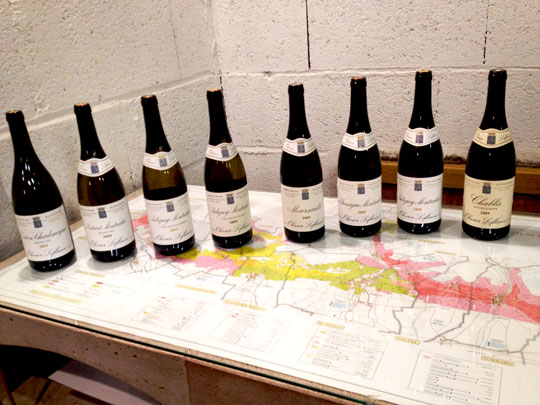 So it’s now 9.30am and onto the next appointment, Olivier Leflaive. We are warmly greeted with open arms by the whole entourage of Leflaive, there was Jean Soubeyrand, Patrick Leflaive and of course Oliver Leflaive himself. Olivier then ushered us off into cars to be driven to the vineyards, where in the space of 15 minutes he made complete sense out of all of the complications with the topography of Burgundy. Then back to the Leflaive cellars for a marathon tasting, hosted by Frank Grux (wine maker), where we tasted eleven wines, ranging from the 2009 Chablis, Les Deux Rives through to the 2009 Batard-Montrachet, Grand Cru, which really was a treat, and so to lunch at La Maison d’Olivier Leflaive. Just when we thought we could take our foot off the gas and relax during lunch, there were five more wines to taste, two whites and three reds, selected from vintages ranging from 2003 through to 2009. I think it’s safe to say that this morning’s appointments had really given us a snapshot into what a Burgundy taste fest is all about! 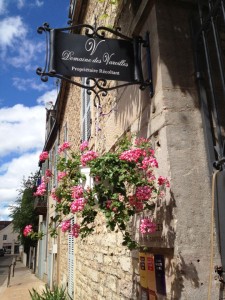 ourney to our next appointment, Domaine des Varoilles.  Mr. Hartley was leading the charge to our chariots, to which I think I remember him bellowing out, “Come on, come on…..this is like herding cats!” Now Domaine des Varoilles has always been one of favourite Domaines, so to actually go and visit them really was very exciting and a real privilege. Upon our rather late arrival we were greeted by Eric (vineyard manager) and “Madame” who then ushered us into a van for a tour of the vineyards. This was amazing, to get really amongst it and see where these quite stunning wines actually originate from. Amongst various plots, we were taken to Clos des Varoilles, 1er Cru and La Romanée, 1er Cru. It was very special to actually see these in the flesh, to see where the wines that we pour into our glass actually grow. And then back to the Domaine to taste some wines, although this was hindered slightly by an invasion of rather intimidating and aggressive flies that can only be described as “horse flies on steroids”, they were huge! Eric gave some comfort though telling us “they do not sting”…..sting they may not, but bite they do! Once we arrived back at the Domaine we were treated to a 2007 horizontal tasting which was followed by a 2003 and a 1999 to finish off! 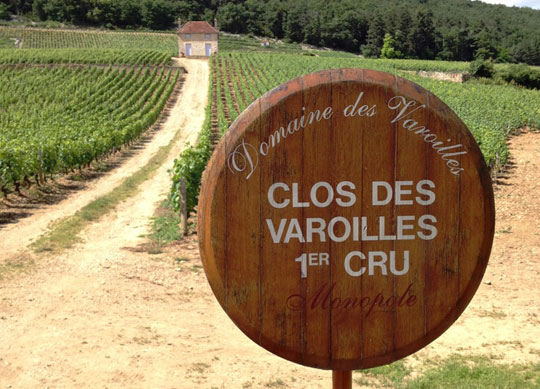 It was then back to La Maison d’Olivier Leflaive to freshen up and dinner. There was a quaint little restaurant in the middle of the Puligny-Montrachet square called “Le Pelugny” which is where we were to dine. Now after a full day of tasting we were all gasping for a cleanser, a cool chilled beer. But these were no ordinary beers. As the restaurant was owned by a Belgian couple, all of their beers were from Belgium as well, and an alcohol percentage to suit. Needless to say these beers were like chilled rocket fuel! During dinner we tried several whites of which two really stood out, the 2009 Puligny-Montrachet, Domaine Leflaive and a new agency wine, 2010 Puligny-Montrachet from Domaine François Carillon, simply delicious!

As dinner drew to a close and the whisky came out I thought that was as good a time as any to call it a night, as it had been quite a tremendous day, a real extravagance, and one that shall remain with me for a very long time to come. If I may conclude day four by pointing out my top wines of the day: