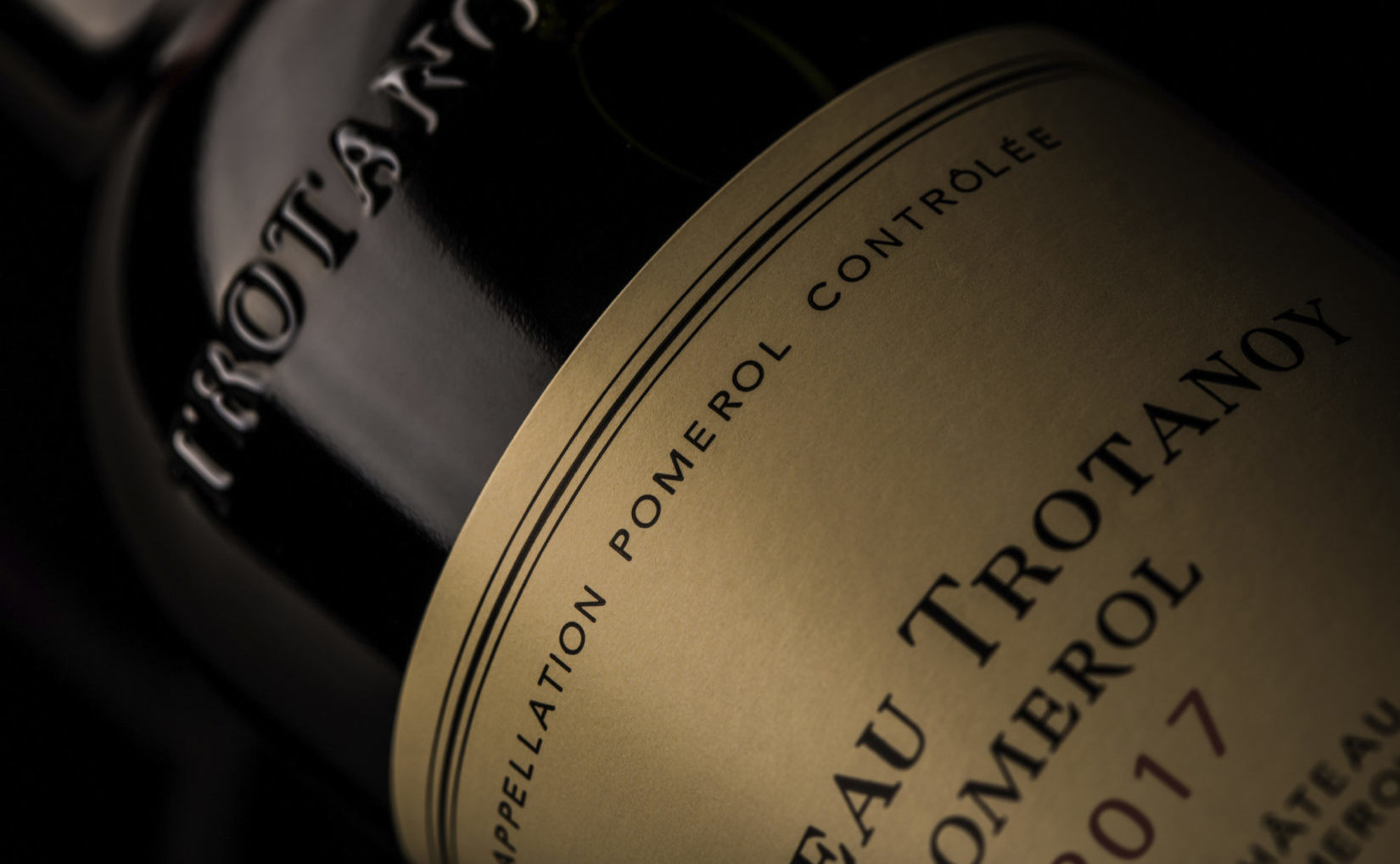 With the release of the 2017 vintage of Château Trotanoy, we take a closer look at one of Pomerol’s greatest estates.

The turning point at Château Trotanoy occurred 65 years ago, when Jean-Pierre Moueix bought it. This purchase in 1953 was instrumental in reviving the fortunes of what had been one of nineteenth century Pomerol’s greatest estates. Over the course of the previous 85 years, Trotanoy had gone from being ranked second in Pomerol – behind Vieux Château Certan and ahead of Petrus [*Bordeaux et Ses Vins, Cocks et Féret, 1868] – to finding itself in a diminished state.

Various plots had been sold off over the years, one parcel forming the core of what is now Château Latour à Pomerol. By 1908, the holdings had been reduced by around a third. Jean-Pierre Moueix’s son Christian and grandson Édouard Moueix now run the estate. The care lavished on Trotanoy by the Moueix family has allowed it to regain its preeminence. The world of wine moves slowly but Trotanoy is unquestionably back in the position it deserves. 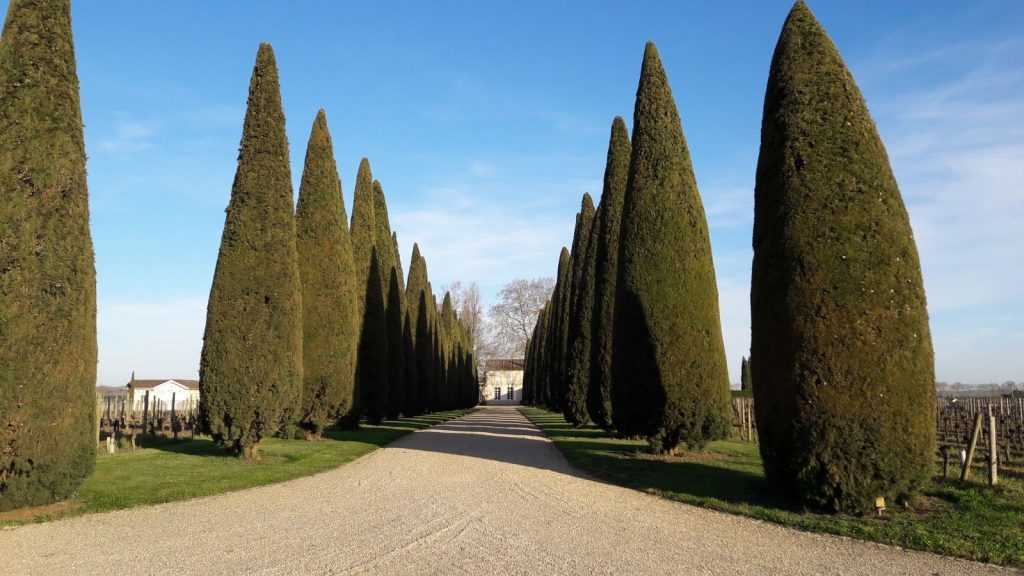 What makes Trotanoy different is immediately obvious when you step into it. The crunch of white pebbles underfoot, the intense reflected light in summer… The stones act as a store of heat, helping protect against frost (which proved crucial in 2017). Beneath the pebbles is clay, which means the soils tend to bake solid in dry weather, in Édouard Moueix’s words, into “an almost concrete-like hardness”. When wet, they become treacherously slippery. Little wonder that the etymology of ‘Trotanoy’ is ‘Trop ennuie’ – ‘too much’, ‘too difficult’…
There are 7.2 hectares of vines here, planted partly on the plateau, partly on a west-facing slope. There is more gravel at the top of the slope and progressively more clay as you descend. The subsoil comprises more gravel, sand and then a rock-hard layer of iron-rich soil, Pomerol’s famous crasse de fer. 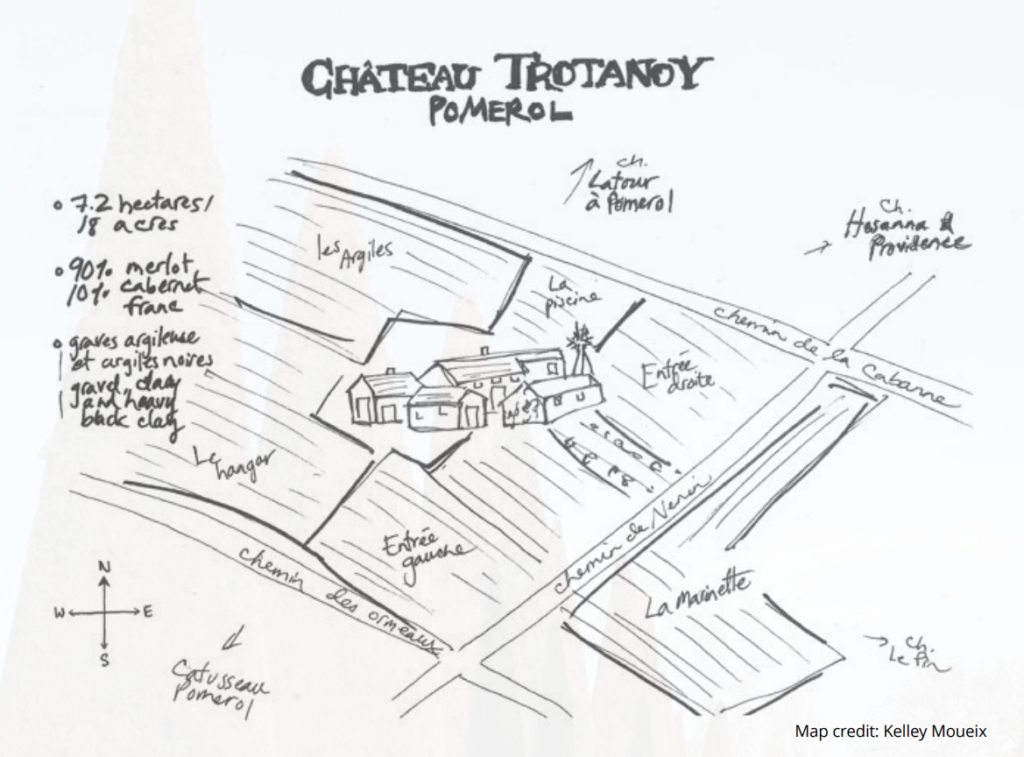 The map above was drawn by Kelley Moueix, Édouard’s wife. As it shows, the vineyard is comprised of six parcels. La Marinette lies to the south-east of the château, towards Le Pin. The driveway with its cypress sentinels is flanked by Entrée Gauche and Entrée Droite. Along with La Marinette, these are the nerve-centre of the estate, planted predominantly with Merlot and benefitting from some of the deepest gravel soils in Pomerol, particularly Entrée Gauche.

To the north-west of the château lie Le Hangar and Les Argiles, the latter, as the name suggests, the estate’s most clay-heavy parcel. The final plot is La Piscine, behind the château, in the direction of Latour à Pomerol. The last significant re-planting was a parcel of Merlot in 2002. Old vines prevail, the average age being 36 years. The plantings are 90% Merlot and 10% Cabernet Franc. On average, only 20,000 bottles are produced per year.

Minimal intervention is the key here. The staunchly hands-off winemaking at Trotanoy follows the approach of the great Jean-Claude Berrouet, who over five decades made some of the most legendary Pomerols, including at Trotanoy and Petrus. Jean-Claude’s last complete vintage at Trotanoy was 2006, when he was succeeded as technical director for Établissements Jean-Pierre Moueix by Éric Murisasco, the current incumbent. Éric had worked as cellar master alongside Jean-Claude since 1993, meaning continuity was and is assured.

The grapes, which in 2017 came in at 13-13.5% potential alcohol, are sorted and fully de-stemmed. The one concession to modernity is optical grape sorting, which has been used at all the Moueix properties since 2009. In 2017, the grapes were fermented and macerated for 21 days in temperature-controlled concrete vats, maintained at the relatively low temperature of 26°C. In both 2017 and 2016, some of the seeds were not totally mature, meaning that it has been especially important here to extract tannins gently, from the skins only.

This is followed by 20 months’ ageing in French oak barrels, 40-50% of which are new. The wines are fined with egg whites and there is no filtration. As with all Bordeaux at this level, but perhaps particularly so with the aristocratic tannins of Trotanoy, bottle ageing is a prerequisite. In many ways this is an extension of the work which starts in the cellar. This is a wine which demands patience, but repays it handsomely. 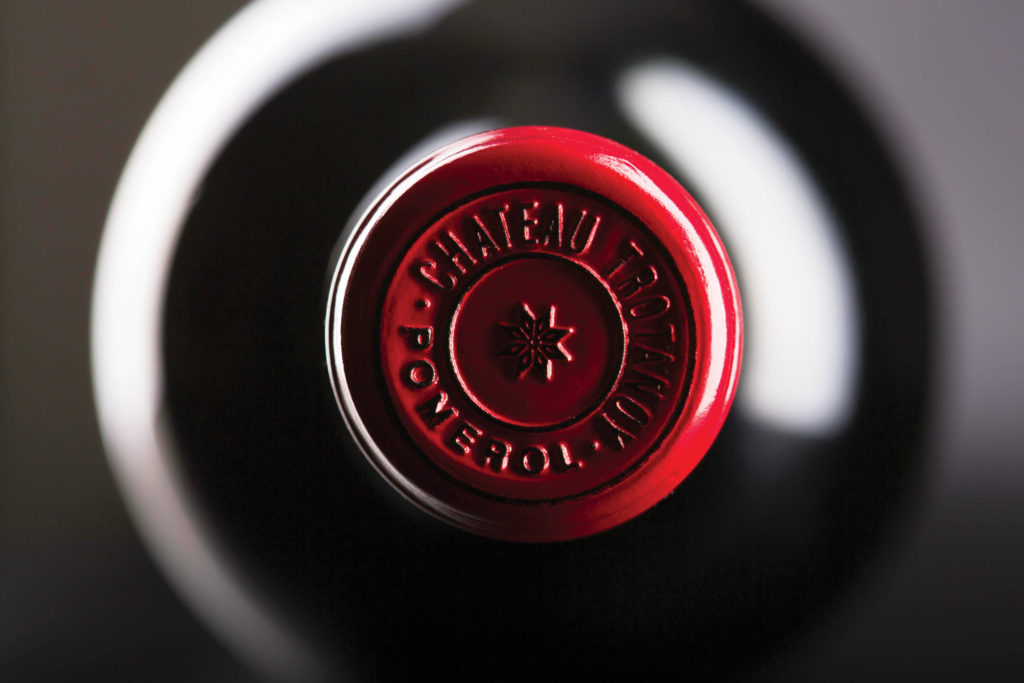