Clos de Tart is a Domaine I am delighted to know really pretty well having worked with the wine for 10 vintages now. This particular evening was a very special one for a few reasons: It was a very complete look back, it was different because of the depth of the back vintages on show. Jordi and his amazing tastings will be well known to regular readers but this was a first one at Ten Trinity Square – Private Club with the tasting orchestrated by Jan Konetzki and with Frederic Engerer from the Domaine giving extra insights – a good formula.

The food, menu below, had been co-ordinated and chosen by Anne-Sophie Pic and was well matched to the wines and of a very high overall standard.

As everyone gathered we started with Salon 2004 En Magnum this is still tight as you can imagine but showing enough to get the senses freshened up. The saline element is there in abundance.

For the dinner we went in the tried and tested “young to old” format with four flights overall. The wines were all opened from about 5pm onwards (non decanted – this is Burgundy!!) and we were seated from 7.15.

Previous posts that are linked above give more details but the overview of the estate is that it is 7.52 hectares in size and is the largest of the five Grand Cru monopoles in Burgundy. It has always been kept as one parcel and was recently, this year, purchased by the Pinault family via their holding company Artemis Domaines. Since 2015 the estate has been practicing organic viticulture and also introduced biodynamic practices in 2016. In wine making terms the estate was taken care of by Sylvain Pitiot, the famed cartographer, from 1996 to 2014 and after a measured (always sensible) handover, by Jacques Devauges.

Clos de Tart 2003 – The most dangerous of vintages, 2003 is all about extremes. There is a great article that was written by Andrew Jefford on just this one very wine. I have had it a few times recently. Bold colour, richness, vibrant nose, fresh in a compote fruit way. A cool iron-like core, this is an infant. A core of dark but not heavy fruit and a creamy texture. An intensity of the season rather than a heat. Impressive (yet again!).

Clos de Tart 2002* – Less overt initially on the nose but very very complete. A tiny hint of leather and ash. A very very good bottle (as the 2003 was). More airy, sublime balance. A tiny hint of saline. Hedonistic yet classic. A little woodsmoke at the end. A joy. *Frederic did then reveal a little more, this was a bottle of 2002 from the plot that adjoins Bonnes Mares (well over the wall obviously). So essentially a bottle from a trial. When you taste at the Domaine you taste many parcels but I have never had a bottle of a parcel at a later stage.

Clos de Tart 1998 – There is a leanness here, I liked it. A different type of energy. Very very good for the vintage. Mellow and together, drink from now. This re-affirmed a recent finding that the best 1998 red Burgundies are better than the perception of the vintage and drinking nicely now – recent 1998 dinner.

Clos de Tart 1993 – Some mint and menthol generally, a greener (in freshness not lack or ripeness per se) character. There is a real elegance, I wrote “an old soul” in the margins, a wine from a different school. When re-tasting later there was a pronounced peppermint tea nose. Fascinating if less obviously complete.

Clos de Tart 1989 – Far more faded colour. Very elegant and almost light. The core is red fruited. A gentle wine. Does not have the presence of the first three and almost more Cote de Beaune in feel but a good portrayal of a trickier vintage.

Clos de Tart 1988 – Oddly I have only ever had this wine from magnum and on two different occasions. This was not quite as good as those showings. It had a slightly musty nose initially but this did not get worse, in fact it lifted and the wine became more focused and refined. Tiny hint of caramel and wood. 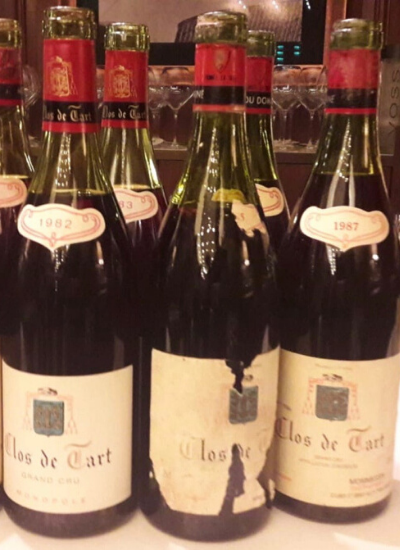 Clos de Tart 1987 – Rose water and sweet red fruit, airy, lifted. Simple but good, on the lean side and best drunk soon but not tired there just isn’t the depth for further progression. Could see a bottle disappearing quickly.

Clos de Tart 1985 – A more mature and degraded nose. Good red fruit thereafter. This came together with more and more time. Quite gentle.

Clos de Tart 1982 – A shade lighter, mellow, pine notes, the nose is a little subdued but the wine comes together on the palate with more presence. More and more refined.

Clos de Tart 1980 – “Energetic tea”, the acidity is a little “to the side” of the wine but this adds to the drive, it is mellow almost delicate but refined and enjoyable. 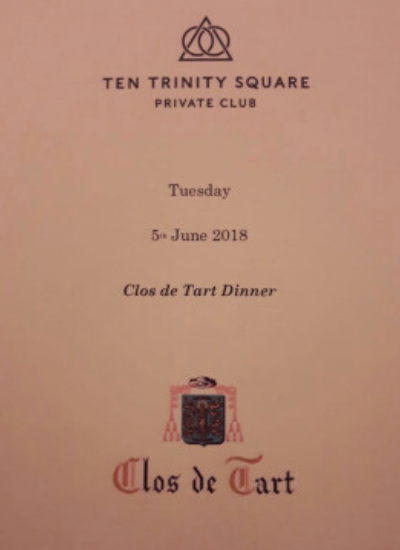 Clos de Tart 1978 – Tea coloured, truffle and cauliflower – not as it should be. Something I have found sadly regular in 1978s that should be great.

Clos de Tart 1976 – As I write this we (in London) are into a third or fourth week of sun and probably the last time we had this was 1976 (2003 was very different). 1976 was a tricky vintage. This is pungent, rich, better and better with air, very impressive. I really liked it.

Clos de Tart 1973 – Very nicely focussed, this is good. Lighter but good. A wine that is “on” it’s acidity. Drink soon but refined.

Clos de Tart 1972 – A little murky and muddied to the eye and on the nose. Slight caramel notes, more animal. So many of the wines here have such precision and focus – this is different. Not bad but lacking focus.

Clos de Tart 1971 – Zippy, good acidity, very poised with a few minutes in the glass. A little caramel note as with a few. Good wine.

Clos de Tart 1970 – A Bovril note and may be a little oxidation. No real tasting note. 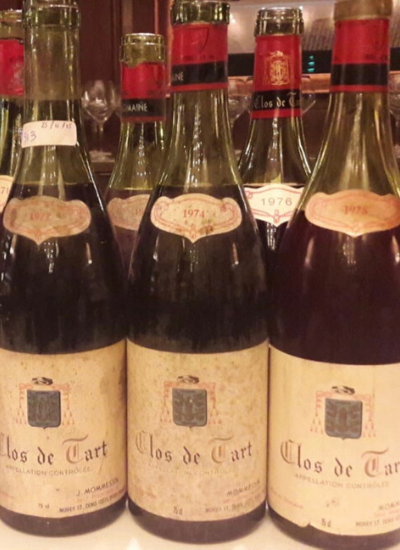 Clos de Tart 1962 – More mellow than the 1966, more introverted. This is very good but slightly in the shadow of the 1966 because it has less weight and energy, this is really unfair as it is delightful on its own. Pretty special.

Clos de Tart 1957 – Airy and delicate, the backbone is the acidity which gives the wine drive in a lean way. Delicate but not without presence.

Clos de Tart 1954 – More mellow and less acidity driven than the 1957. The wine has bigger proportions too, amazing for 54years of age.

Clos de Tart 1945 – A wine of quite some legend. A really bizarre initial nose of mango chutney which oddly managed not to seem out of place. Very precise thereafter, a real red fruit density. Cracking! 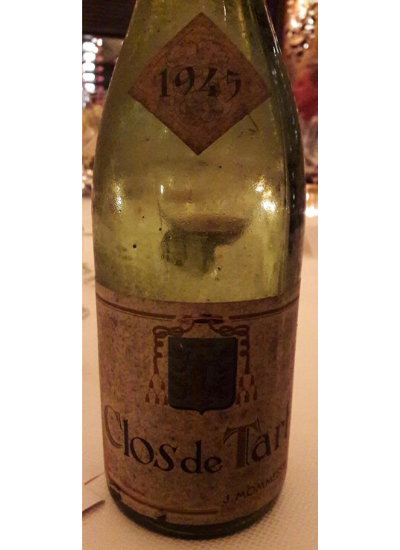 Clos de Tart 1942 – Airy and lifted, very fine and delicate, I could drink a lot of this which is, I realise, not a useful comment but it is a wine of completeness. Very pale.

Climens 1950 – Jordi always likes to finish with a Sauternes and nobody was disagreeing here! The 1950 Climens was so pungent and rich, a dish in itself. It had been quite an evening. Paced to perfection, great service, deliciously subservient food and a great mix of people and opinion.

So conclusions from the evening? I think the key thing everyone took away was that the quality of the terroir really shows though. The more recent vintages had a more weighty intense personality but the older ones showed a fineness that I don’t think we expected. As I said at the top I know the wine well, may be even very well, in recent years and the quality of the last 20 years is well documented. It has been rising steadily. The 60s and 70s though had far more “hits” than “missfires” which was not expected. Also consider that two vintages people might expect to be stars – 1978 & 1985 – were less successful on the evening. I had also not expected to see the level of refinement and finesse in the older vintages but to go back to the start of the conclusion “Terroir does win through”. Expectation was exceeded!!

An exciting future lies ahead for this great site. Thank you to Jordi for all the organising and sourcing, to the Domaine for the gaps they filled, Frederic and Neal Martin for their insights and to the team at Ten Trinity for a great evening. Splendid!