Dinner with Roberto Conterno in Piedmont 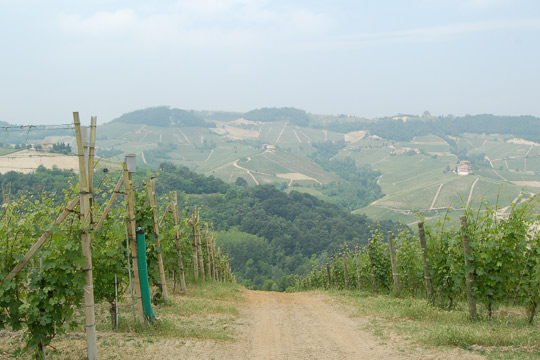 Last Thursday morning whilst still a little tired from the wonderful Clos de Tart dinner, Adam (MD), Alison (Buyer) and myself met up at Gatwick for the flight to Torino.  To say I was a little excited about this trip would be an understatement of the year as I am something of a Barolo obsessive. Having been met on arrival by a muggy 26 degrees, we folded ourselves into the fiat 500 and set off for Monforte d’Alba.  Despite the heavy traffic we were at our hotel in Monforte – Le Case della Saracca which I strongly recommend – with just enough time to freshen up before meeting up with Roberto and his assistant Francesca. We shared a bottle of a Piedmont Sparkler, Valentino 2006, and very good it was.

After this we all jumped into Roberto’s car and headed to a nearby restaurant that Roberto had chosen – Locanda nel Borgo Antico. It was terrific – attentive service, great food and a nice atmosphere with plenty of space, oh and a stunning view. We had seen Roberto sneak a bottle out of the boot of the car but it was not to be revealed until later. We had two Barolos to start things off.  Roberto chose to show us two different styles – I must say at this stage that it is very rare for a producer anywhere in the wine world to show another producer’s wines and much as we knew we would finish the evening with a wine of Roberto’s, it was very interesting. 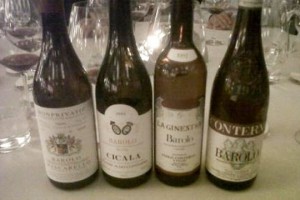 The first wine was Barolo Monprivato 2006 from Guiseppe Mascarello; like Roberto’s wine, this is a very traditional style and from one single vineyard.  There was a little, and not unpleasant, “stink” that went quickly, which was followed by a really lovely, almost Volnay-like red fruit elegance.  A very smart wine, which will develop well. I loved the very traditional style.  Roberto suggested that their 2005 was very good indeed. Wine two could not have been more different – Barolo Cicala 2005 from Robert’s uncle, Aldo Conterno. Much darker and more saturated of colour; rich, dense and dark, not so much my style if I am honest but good, with lots of fruit, a touch of coffee and linseed notes. This wine changed throughout the meal more than wine number 1.  The combination was fascinating to look at, smell and taste. The Vitello Tonnato I had with these two was superb!

By now Roberto had revealed what the last wine was but at the same time suggested that we had a wine that was between the first pair and the last wine in terms of age. A recommendation from the sommelier, the wine in question was Barolo La Ginestra 1982 from Paolo Conterno (no relation) – very traditional in style, a typical aged Barolo.  Just the sort of think I love – a Bovril and sherry scenario on the nose, a lovely brick colour and really really nice and balanced.  Next up was the highlight Barolo Riserva 1971 from  Giacomo Conterno and therefore Roberto – the term Riserva was dropped from 1985 onwards as it was only a legal requirement back then. The sommelier was so excited by this bottle and served it at the perfect temperature, cool as for red Burgundy. It was holding an amazing colour.  Youthful and fresh, very complete, with a slight maturity “funk”.  Seamless and nearly too balanced, this is a wine you could never grow bored of and an early candidate for my mature wine of the year award (don’t worry this is only a hypothetical award!) The four wines a set were brilliant and fascinating and show that one should just try these wines – they are not the tannic monsters that they are sometimes portrayed as.

Through the evening many questions were asked and topics discussed, I’ve summarised some of Roberto’s answers below:

Decanting? Yes with wines that have been in bottle for 2 or more years and don’t be afraid of 2-3 hours or more; Barolo is not afraid of air.  A phrase I remember is “in Barolo oxidation brings sweetness”.

Tasting others producers wines?  Yes, but in private and always blind and never for the sake of criticising them, purely as a way of looking at what people are doing and what they are producing.

Buying land in Barolo?  Would love to but so rarely does a good vineyard or site come up.

All the Conterno’s in Barolo… there are many, as the name Conterno is not rare in Italy.  The only relation is between Roberto’s estate (Giacomo Conterno) and that of his Uncle Aldo.

The Challenges of making Barbera and Nebbiolo… the Barbera does not like rain but is fine with almost any amount of heat and is earlier to harvest.  The Nebbiolo is not a fan of excessive heat but is ok with rain and ripens late, sometimes very late.

Why the Monfortino bottle is different to the other wines?  Purely as a way of Roberto’s grandfather knowing which was which in the cellar. In past times the wines would all have been kept “naked”.

If he had to make wine elsewhere, then where?  Burgundy, “I am a massive Pinot Noir fan” and if not Tuscany but working with Brunello (Sangiovese) rather than a modern style…Soldera got a mention.

It was a brilliant evening.  As this is already quite long (I couldn’t help myself), I will cover the following days tasting and vineyard visit separately…