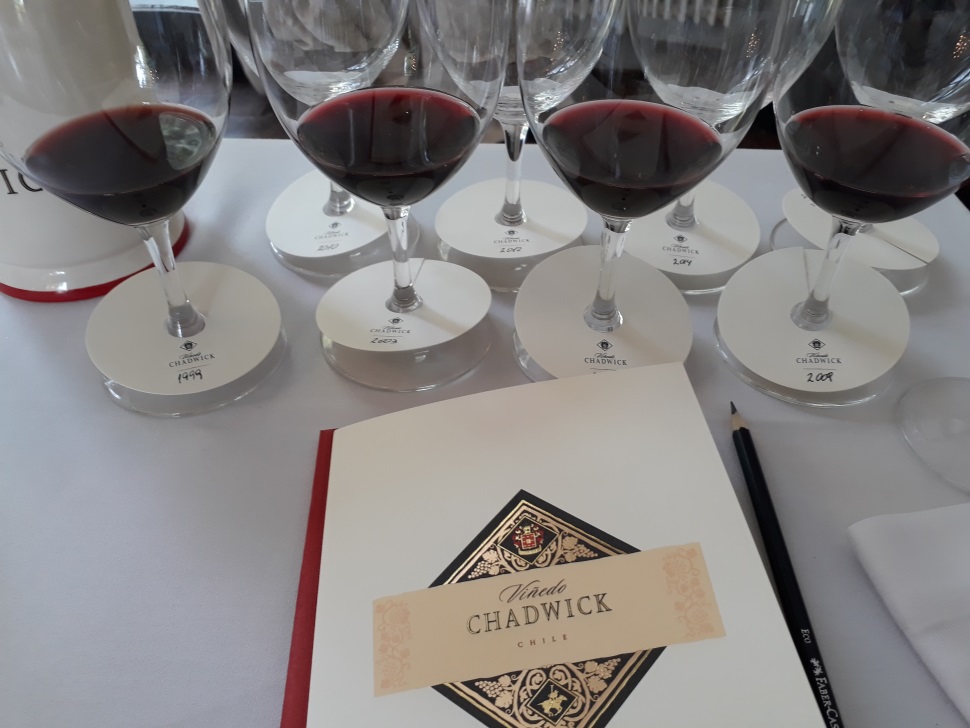 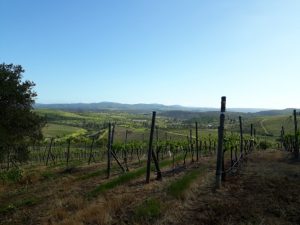 Is Chile the first country that comes to mind when you think of fine wine? Maybe not, but given the recent upsurge in the popularity of wines from South America, it may well be in the future. Last month our very own Christelle Chedeville joined a merchant’s trip to Chile organised by Eduardo Chadwick, Viña Errazuriz and Hatch Mansfield, their UK agent. Here’s what she discovered about the vineyards currently making the biggest impact on the world stage.

Soon after arriving at Santiago Airport where the Viña Errazuriz team was waiting to greet us, we headed to our hotel, in Viña del Mar, a coastal town, close to the commercial port of Valparaiso.
After a spot lunch, we headed for our first visit in Aconcagua Costa. The property is the closest to the coast and has its own dam – useful for irrigation in the often very hot conditions to be found here.

The Aconcagua Costa property was acquired by the Chadwick family in 2005 with a view to showing the terroir and potential of this coastal region. They recruited a French geologist, Françoise Vannier-Petite to draw a map of the various soils on the property. Some plots happened to have a high level of schist, which is extremely rare to find in Chile. Las Pizarras, meaning ‘slates’ in Spanish, come from the plots with a high level of Schist in the soil, giving the grapes their mineral flavours and aromas. They are at times reminiscent of Burgundy wines, perhaps helped by the Burgundian winemaker who assists Francisco in their production.

We tasted in an open ‘hut’ offering stunning views of the surroundings. We started with Aconcagua Coasta Sauvignon Blanc 2016, then the Chardonnay and then moved onto the reds (Pinot Noir and Shiraz), concluding with Las Pizarras wines (Chardonnay and Pinot Noir).

After an interesting first day, we took to the road again and left the coast to head inland to the Seña property which started as a joint venture between Robert Mondavi and Eduardo Chadwick in 1985 and which has belonged solely to the Chadwick family since 2005. Seña is a property under biodynamic agriculture, with stunning surroundings and an important ecosystem. Seña was, along with Viñedo Chadwick, amongst the wines from the Errazuriz portfolio to create a surprise at the Berlin Tasting in 2004.

The terroir at Seña comprises more colluvial soil where the stones are sharper, coming from the mountains. This mixed with clay is ideal for Merlot, Carmenère grapes.

From the ‘Mirador’ (view point) located higher up on the slopes you can see the Andes and its highest peak, Aconcagua at 6966m, but we were not only there to admire the view but most importantly to taste several key vintages of Seña from the beginning of its production to where it was now heading. Seña starts as Cabernet Sauvignon and Carmenère, then later Merlot is added, then Cabernet Franc and Petit Verdot. These changes follow the arrival of Francisco joining the technical team in 2005. From 2013, Malbec has also been added.

The final property of the day, the heart of the Viña Errazuriz, where it all started: Don Maximiano. This property is located further inland as we get nearer to the Andes in Panquehue. Here there are two main buildings. One fairly modern, and new, being the winery and one a little more traditional, cellars and tasting area, (where they used to receive the grapes and do the bottling by hand back in the early 1900s). The building itself dates back to 1870 and has survived several earthquakes.

The winery opened in 2010 and is built on a gravity system, using solar power. It is on three levels, at the top grape reception, once the grapes have been harvested and pressed they are then transferred into tanks, which are on the level below, for fermentation. You can only see holes in the ground which are the top of the stainless steel tanks. Then we made our way to the barrel room or maturation level. There, were some barrels of the various wines being produced, Seña, Viñedo Chadwick, Aconcagua Costa etc…Not all is being stored here and we were about to find out the other location as we made our way back to the old building for our tasting of Don Maximiano.

We started with Kai and Cumbre and then went on to taste again key vintages of Don Maximiano from the 80s, 90s, 00s and finally the latest ones. There again it was fascinating to see the progress and evolution of this wine and to see how change in the blend through the years brought to a lot to the wine itself.

Being our last evening in Chile, we had dinner with Eduardo and his team at the property. We were treated to an asado, with lamb from Patagonia (the Chilean side that is) and King Crab and some canapés which were all delicious and prepared especially to go well with the wines amongst them Seña 2005/2009 (vintages not yet released)!

On our last day, we were moving closer to the Andes by heading to Puente Alto, south east of Santiago to visit Viñedo Chadwick where the old family home was. This was a very important property (around 300ha) until the government seized some of the land to build more houses as Santiago was expanding. The Chadwick family only kept the family home and a polo field. Eduardo’s father, Don Alfonso Chadwick Errazuriz was an avid and well recognised polo player as we get to a room with all the trophies and photos from this past. (19 times champion and part of the Chilean team that beat Argentina in Polo – apparently the only time it has happened!)
Eduardo joined the family business in 1983 and after much petitioning the polo field was turned into a vineyard. Unfortunately Don Alfonso passed away in 1993 a year later and never got to see the end of this project so in a way the name is a tribute to him. The polo goal posts can still be seen today.

Francisco was once again on hand to show us the soil, this time alluvial which is more suitable for Cabernet Sauvignon.
We then made our way to the tasting room for our final and most important one. Here again we tasted key vintages of Viñedo Chadwick from the 80s to the latest 2015. One more time the evolution was noticeable, the wines were elegant. 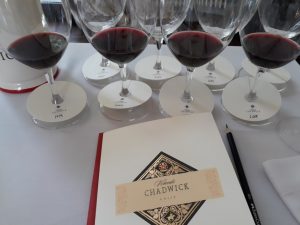 We finished our tour with a farewell lunch and some special vintages of Viñedo Chadwick and then headed off to the airport to catch our flight for London.
This trip was very enriching and enabled me to have a better understanding of terroir but also of Chile. It really showed that Chile can be taken seriously and is definitely amongst the big boys and not a country to be ignored or dismissed.