YOU HAVE TO AGREE TO THE USE OF COOKIES TO BE ABLE TO PURCHASE AS A GUEST.
Producers, Tastings 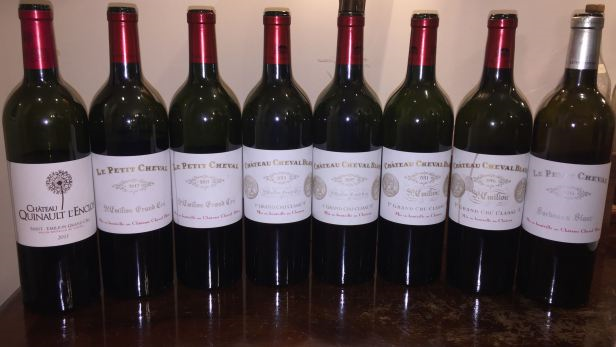 In the office on Thursday evening we were pleased to host – Arnaud de Laforcade (Commercial Director) & Pierre-Olivier Clouet (Technical Director) – for a tasting of, mostly Cheval Blanc. They are an impressive pairing, no slick suits or “we are farmers really” chat…just a good honest approach to trying to make great wines at their estate.

Arnaud set the scene and then Pierre-Olivier led the tasting, Cheval Blanc started in 1832, and in honesty very little has changed. The stated that they try to be true to the site and the tradition but with today’s “tools”. So essentially they are not trying to make a different wine now just “Classical wines with a modern precision”. 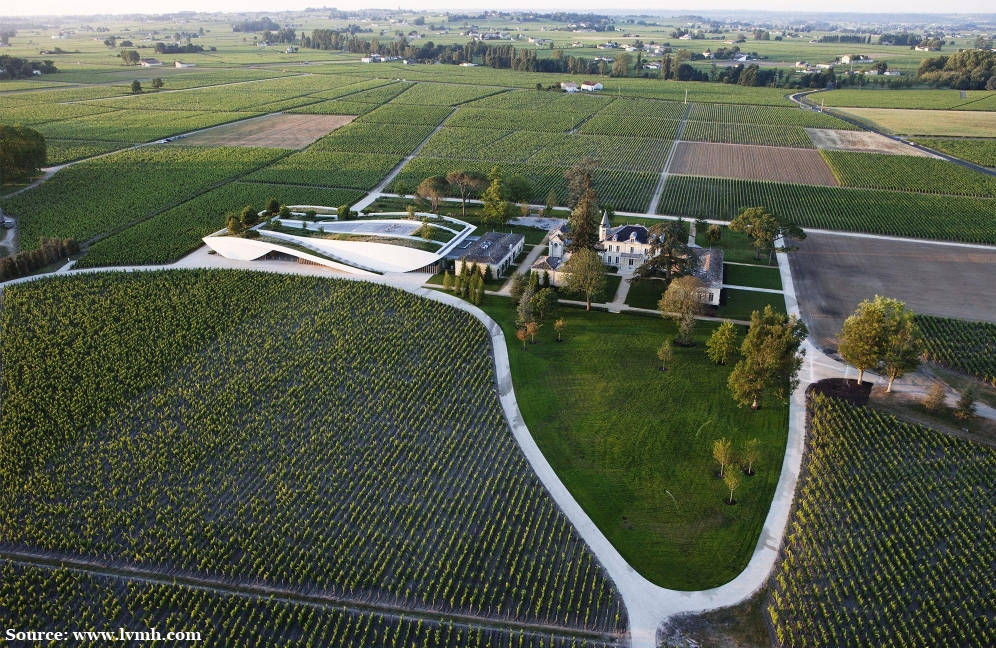 In terms of situation they are not the limestone plateau, Cheval Blanc is actually 5km from the plateau. The soil is more akin to Pomerol than St.Emilion. A fact that is well picked up by Neal Martin in his book “Pomerol” as he includes Cheval Blanc as such. Cabernet Franc (CF) is king for this estate, in St.Emilion one of the only others to have much CF is Ausone but they are on limestone. Lafleur (Pomerol) also has a lot of Cabernet Franc. To set Cheval in context it is 39 Hectares of vines, an average St.Emilion estate is 6.5ha. The size gives them “diversity”. The wine is made from this diversity. Vinified plot by plot which is why the “new” (rather swanky) cellar was made. This cellar as 52 vats, with 9 different size options. The vineyard itself is actually made up of 45 plots.

Both the chaps were very clear that a “good” Cheval Blanc is larger (in production) and uses the most possible plots. This is a big departure from many Bordeaux second wines which often come from the same, or very, similar sites within the estates they are from. Pierre-Oliver obviously felt that the term terroir, whilst useful is over done, he prefers to talk about soil and climate. I like what he also said about “Classical” vintages – he includes 2012, 2008, 2006, 2004, 2001 – it should not, in his view, be used as a term for the lesser vintages.

When getting more onto the wine itself Pierre-Oliver said they look for “some miracles in the vineyard and no errors in the cellar” and that “technology can not make a good wine great” but that the “standard of the more tricky, damper, cooler vintages is no much higher”. When choosing when to pick  there are three things they look at – 1) Aromatic maturity, 2) Acid vs Alcohol, 3) Tannins. 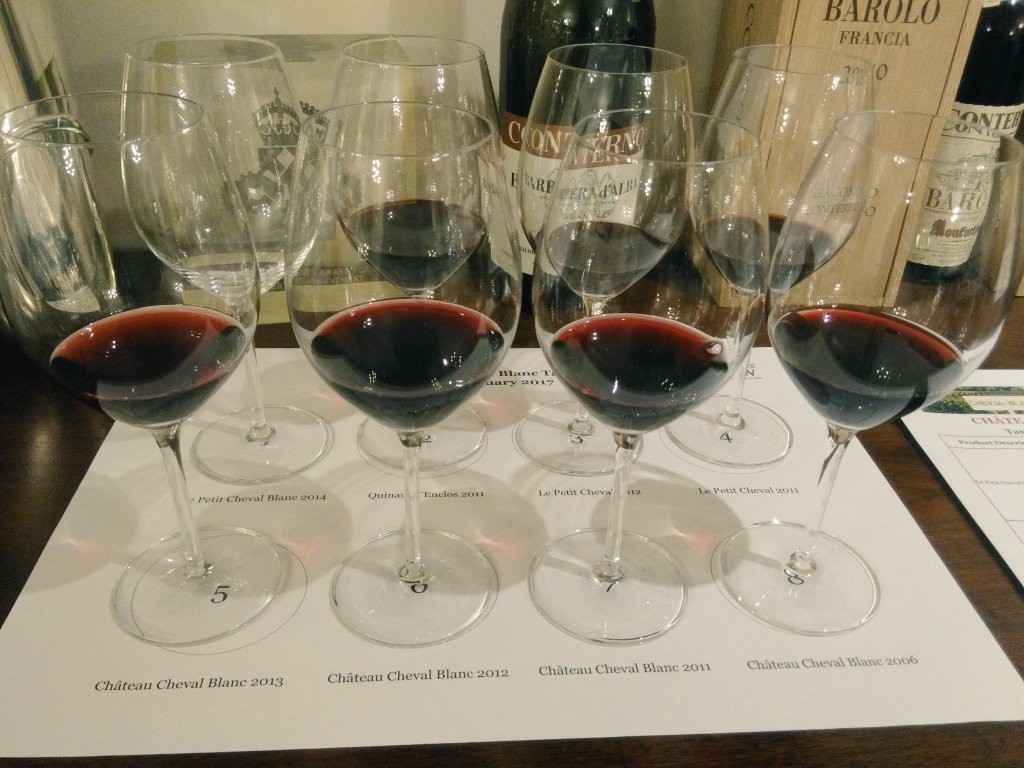 We started the tasting with the one wine not from the Cheval Blanc estate – Quinault L’Enclos 2011 – This estate was bought in 2008. It had been owned by Dr Alan Raynaud. It is based on pure gravel near the Dordogne. Nice nose, honest fruit, more red than black but full. This has high acidity and a cheesy attack on the palate. 70% Merlot (M), 20% Cabernet Sauvignon (CF) and 10% CF, there is a slight greenness, almost a gnarly character. They prefer 2011 to 2010 and love the 2014 as it is all about improvement for them from year to year. They have uprooted 30% of the estate. Tiny bits of chocolate here, sturdy but not OTT. Decent. 16.5/25

Le Petit Cheval is the second wine but as I mentioned earlier it isn’t a “brand” so to speak and tends to only be 10,000 – 20,000 bts. All plots in the estate have featured in the first wine in the last 4years. The team feel that Le Petit Cheval (LPC) should be of the level of a 1er GC “B”.

Le Petit Cheval 2012 – Most CF ever with 76%. Lovely nose, a little mocha and tobacco here, lush plumy fruits then more body and the Cab shows, good lift and acidity. I like this, fruit is behind the savoury structure a little, good length. 18.5/20

Le Petit Cheval 2011 – More than 70% Merlot. Compote fruit and a little subdued, redder and rounded, jammy but not in a bad way, pure but simple nose. The 2011 character does come through, toughness and a little cheesecloth. The nose is far superior to the palate. 16.5/25

Cheval Blanc 2013 – “Plenty” of rain in all but July…Muted but balanced nose. A gentle wine, this is fine but it is a touch bland. Gentle and balanced. The structure is very well done. Good length. Gentle red fruits do come out and a little violet. No lack of tannin. Nicely done, light but good. 17.5/25

Cheval Blanc 2012 – A real classical vintage, tricky start, wet and cool then in June the weather changed. Much deeper colour. 52% CF. There is a succulent depth, tobacco and then more layers, lush fruit on the darker, more serious, side. I like this, I also think it may close down. Serious wine, leave 10 plus years. More and more classical over time. 20/25 (upped to 21/25 later)

Cheval Blanc 2006 – Very warm and dry towards the end of the harvest. Warm leather and a little soy but not saline. Darker fruits, inside of a banana…has a lovely, proper feel and with good length. 19/25

Then it was time for something a little different:

Le Petit Cheval Blanc 2014 – Very gooseberried, nice spice and some grip, a little brine but not too much. Has a quite lush texture. This new wine was made in 2009-2013 but kept in house as they wanted to release a vintage they were really happy with. They are not looking for Sauvignon character per se although it is 100% Sauvignon. The Sauvignon was grafted onto old vine Merlot at La Tour du Pin, the Chateau bought by the Cheval Blanc team. They use close to 60% new oak (it really doesn’t show) and a lot of big barrels 600 litre “foudres” for 18 months. For  2014 there were 4,500 bottles produced, 3000 were sold. The 2015 is smaller as it was from the same sites but yields were down, 2016 will be around 10,000bts. 19/25

It had been a fascinating tasting, good to get a better picture of the estate. Cheval is without doubt one of the world’s great estates and wine lovers love to drink it. The recent release pricing has left people a shade confused and possibly disappointed but the wine is the key thing. All would appear to be in good hands…I look forward to visiting in April and tasting the 2016 wines.