YOU HAVE TO AGREE TO THE USE OF COOKIES TO BE ABLE TO PURCHASE AS A GUEST.
Champagne & Sparkling, Fine Wine

The Rarest Champagne In The World

Champagne in 1920 was a very different prospect to what it is now. The region had lurched from one crisis to another. Grage growers had rioted in 1911 over the perceived racketeering of the large houses. They accused their customers of keeping the prices of grapes artificially low. There were even rumours of some champagne houses using rhubarb or apple juice to doctor their wine. The Great War was still a recent memory for the survivors. Vineyards across Champagne had fallen into disrepair.

Then just as the region seemed to have regained its past glory, the Russian Revolution cut off one of the most profitable markets. Soon after, Prohibition and the Great Depression struck another in America. Champagne couldn’t catch a break. You’d have been foolish to buy vineyards around this time.

Going Against The Crowd

One man didn’t think so. His name was Eugène Aimé Salon. He’d bought a small plot in the corner of Le Mesnil-sur-Oger in 1905 with the proceeds of his flourishing fur business. He was a man of style who enjoyed fine tailoring, fine food and fine wine. And he was never the type to follow the crowd. The growers and champagne houses were quarreling in 1911 over financial gain. He owned a vineyard because he wanted to make champagne that suited his fine taste. He preferred dry and precise champagne so only used chardonnay. He had no interest in gaining commercially from it. And why would he? As the rest of the region descended into infighting during 1911, in Salon’s little corner of Champagne all was well. 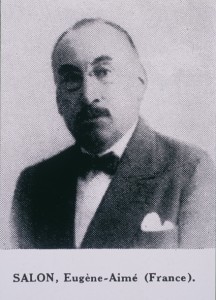 So well in fact that word began to spread among Salon’s friends about just how good this champagne was. Word eventually got to Maxim’s of Paris, a celebrated restaurant frequented by Coco Chanel among others, of the superior quality of Salon Champagne. Unusually it was only made with chardonnay, the blanc de blancs style wasn’t really known outside a few small circles.

Though Salon was keen to keep his champagne to his friends, the desire of Maxim’s to bring it to a wider audience eventually won out. And so deals were done, Maxim’s was to be Salon’s first and only customer. It wasn’t until 1957 when the company began selling to more. But owing to his insistence on only producing wine in the best vintages, by the time Salon expanded its customer base from 1, it had only produced another 14 vintages.

The Legend Of Salon

In the pre-internet age, this served to add to the mystique of Salon. Nevertheless, the fact it was always in short supply and otherworldly quality meant Salon Champagne quickly passed into legendary status among champagne lovers and wine critics.

Today, Eugène Aimé Salon’s legacy lives on under the stewardship of Didier Depond. Where other houses compete for global recognition, Salon still only produces 50,000 bottles a year. Even in 2002, one of the best recent vintages for Champagne. Salon is still the benchmark for blanc de blancs champagne. It’s just a matter of getting hold of it.
[poll id=”8″]