Wine and watches together at last

Lovers of fine wine and watches gathered this summer to celebrate their joint passions, thanks to an exclusive event hosted by David Duggan Watches, Tudor watches and Corney & Barrow wine merchants. Since Tudor is Rolex’s younger, slightly less-well-known sibling, the idea behind the evening was to explore some hidden wine gems produced by prominent wine houses.

It provided the perfect opportunity to get a closer look at Tudor’s latest pieces that were launched at Baselworld 2017, as well as some of Tudor’s most beautiful vintage pieces.

“It all started in 1926,” opened Sven Olsen, Tudor UK general manager, explaining that Rolex founder Hans Wilsdorf had been committed to making a watch that could sell at a more modest price, yet that would offer the same, impeccable quality.

Wilsdorf had the two brands working largely side-by-side, sharing innovations and taking ideas from one and trialling them out on the other. For example, not many people know that Tudor was the first to introduce a self-winding chronograph in 1970 – before Rolex. That spirit of innovation and pushing boundaries still endures within both brands.

“We like to call Tudor the Robin Hood of wristwatches,” David Duggan said in his welcome. “They are unbelievable value and quite under-priced when you consider their counterparts. It’s a great feeling when you can sell a watch when you know that the punter is getting a bargain.”

Such is David’s passion for the brand that in 2016, he became a Tudor agent and the only independent watch broker in the country to stock brand new Tudors alongside vintage, pre-owned models, like the Monte Carlo chronographs from the 1970s.

Glasses of Champagne Delamotte Blanc de Blancs NV kicked the evening off. Fittingly, this delicious, medium-bodied dry chardonnay is the sister house of Champagne Salon, possibly one of the greatest champagnes on the market. “As with watches, cars, guns, wine, you have always got the thinking man’s choice, rather than the obvious, heavy-branded one,” said Adam Brett-Smith, managing director of Corney & Barrow.

Brett-Smith has been a fan of the brand for a while and wears a Tudor Heritage Black Bay steel. Pointing to his wrist, he said: “You might think this was given to me to wear for this evening. It’s not.”

Discussing the idea behind the event, he said: “It was actually quite simple because there’s the relationship which Sven has made between Rolex and Tudor – a sort of symbiotic relationship – a family relationship, and whether it’s the Robin Hood, or the thinking man’s Rolex, or however you want to call it, you’ll find the same with wine.”

Brett-Smith went on to share some observations on why wine making is a lot like watch making. Depending on the exact wine, the ageing process for a bottle can last between 12 and 24 months, although some estates will keep them for years. Compare that with the meticulous creation of a new Patek Philippe timepiece, which for the simplest of models can take around nine months. 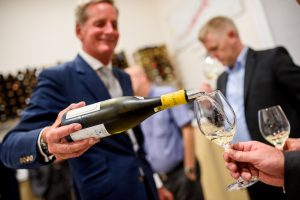 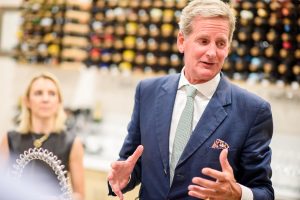 An intimate wine tasting followed, with guests guided through a series of delicious wines that are not often afforded the spotlight on account of their celebrity siblings. The Macon-Verze Domaines Leflaive was first up, a dry biodynamic chardonnay from a house initially founded as a négociant to enable the Leflaive’s other family venture in Puligny. Other highlights included an exceptional Roc de Cambes from 2011 – a Corney & Barrow exclusive and bedfellow of the prestigious Tertre Roteboeuf Côtes de Bourg property. With a grape mix of 75% Merlot, 20% Cabernet Sauvignon and 5% Malbec for good measure, this hybrid wine delighted guests with a silky, dark-fruit-heavy complex blend and once again cemented the evening as one of astounding quality and surprising value.

This was not an evening about celebrating “the cult, the top of the pops, the most expensive, the most glamorous, with layers and layers of production,” but instead, as Brett-Smith claimed, a chance to “look fractionally, not even below, but sideways, to see if there is a sister or brother relationship to a wine estate.”