Furmint February – the ferment about Furmint

February is dull: shades of grey (despite the flash of pink on 14th), cold, wet. But there are a few up-sides at least. Firstly, February is shorter than January. Secondly, nobody tries to take away my wine. (And forgive me a quick mini-rant on January for a moment: I fully subscribe to the noble desire to live healthily and well – just as long as this does not get drawn into the concept of ‘wellness’, a word that for me has the quality of nails-on-a-blackboard, triggering a violent rising ‘unwellness’ – and for me, wine is part of that. Why anyone would choose to ‘go dry’ in January, the longest, dreariest, most miserable month of the entire calendar, seems to me an act of questionable sanity. For those who wish nobly to exercise self-flagellation/defer gratification, how about Dry July. Amen). Thirdly, February now comes with its own vinous prefix.

Attaching Furmint to February strikes me as one of the better ideas to come out of recent years. Perhaps it’s the alliteration (always strangely satisfying, in a nerdy way), or maybe it’s the ‘underdog’ element – championing Furmint feels rather like willing a Wimbledon wild card to take Federer to five sets (and by the way, if Mr Federer is reading and wants to find out more about Furmint, a tasting can be arranged one-on-one). Whatever, Furmint is so little-known and yet so fabulous, it seems only right that it should be awarded an entire month of its own in the spotlight.

So why all the fuss about Furmint?

Well, Furmint is one of the most exciting grape varieties that exists, period. A quick low-down: Furmint is naturally high in acidity, that all-important structural ‘backbone’ of high-quality white wines, and vital for ageing potential. The grape also produces abundant sugars to offset all that acid, has thick skins rich in flavour compounds, and ripens late, developing great aromatic delicacy and complexity. It is this special combination of attributes that gives Furmint its astounding stylistic range.

And Furmint is astonishing! One moment dry, zingy and refreshing, a star-jump in a glass, not unlike a young Sauvignon Blanc. The next: classically structured and refined, with the creamy weight and minerality of a smart white Burgundy. Or made off-dry, subtly-textured and complex with honey and marzipan, like the great Chenin Blancs of the Loire Valley, such as a Vouvray or Savennières. 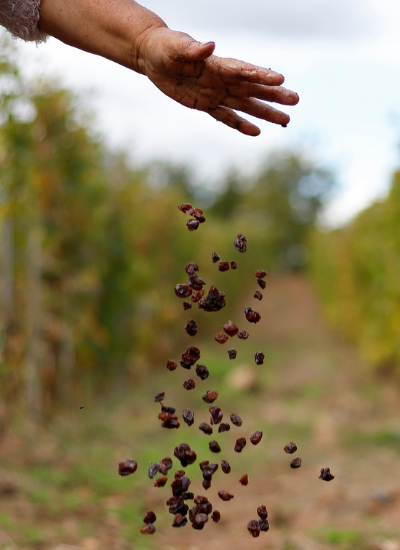 All in the genes? Quality is in Furmint’s DNA. I wonder how many of you have heard of Gouais Blanc? Well, it’s a grape, and a rather important one, having parented a rather glittering line-up of children, not least Chardonnay, Riesling, and – drum-roll – Furmint. Who knew this little-known variety from the hills of North-East Hungary would turn out to have such stellar half-siblings? But class is instantly identifiable: once you have tried a good Furmint or few, you can see for yourself.

Of course, Furmint’s most famous iteration to date is the role it plays in the legendary dessert wines of Tokaji, said to be the oldest sweet wines in the world. These magical ‘aszú’ wines are made from late-harvested nobly-rotten grapes, predominantly Furmint but also Hárslevelű and typically a dash of other local varieties.

These wines have long been one of Hungary’s most famous exports and were once the preferred nectar of the international glitterati. Louis XIV was so enamoured of aszú he proclaimed it the ‘Wine of Kings, King of Wines’, Peter the Great was said to order 600 barrels of it a year, and Queen Victoria was always sent a bottle on her birthday.

Aszú wines are extraordinary, unique in the world of sweet wines, due not only to Furmint and its fellow grapes, it’s the terroir of the Tokaji region – its climate, topographies and volcanic soils – but also of course the idiosyncratic, ancestral methods used in its production. I’m going to touch on this briefly, as the technique is as singular as the wine itself. It involves taking the shrivelled, botrytised aszú grapes and making them into a paste, which is then incorporated into a base wine in varying proportions. The more of the aszú paste added to the wine, the sweeter and more concentrated the wine will be. 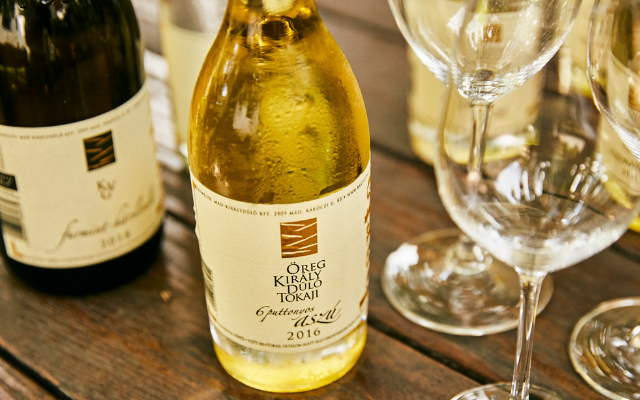 This is measured in terms of the number of ‘puttonyos’ (between 3 and 6, the highest). A ‘puttonyo’ in Hungarian means ‘hod’ or ‘basket’, the traditional tool used to measure the shrivelled grapes. A Tokaji made entirely from aszú grapes is known as Eszencia (‘essence’).

Aszú wines are known for their wonderful colour spectrum: a luminous lemon/gold hue when young, the wines evolve into countless shades of burnished amber and rich dark golds, flavours unfurling from blood orange and apricots to barley sugar, caramel, smoke, tobacco. The wines are always lusciously creamy and rich but remain tantalisingly refreshing thanks to that signature tangy acid, rendering them virtually ‘immortal’, as described by wine writer and broadcaster Oz Clarke, an expert on the region and its wines.

But while it is these wines that have made Tokaji famous for centuries, Furmint is attracting increasing attention for the range and quality of its drier wine styles too.

At the heart of this dry Furmint movement, is the village of Mád, deep in the Tokaji region, whose historic vineyard classification dates from the 1700s. Here, in the volcanic hills of north-eastern Hungary, Furmints are particularly distinctive. Mineral, complex and structured, they are similar to the fine white wines of historic regions such as Burgundy, the Loire Valley, or the Mosel.

It is here that the Barta Winery was established. Barta is a young winery in an old terroir. Businessman Károly Barta had long dreamt of restoring local vineyards abandoned during the World Wars and subsequently razed under Communism. 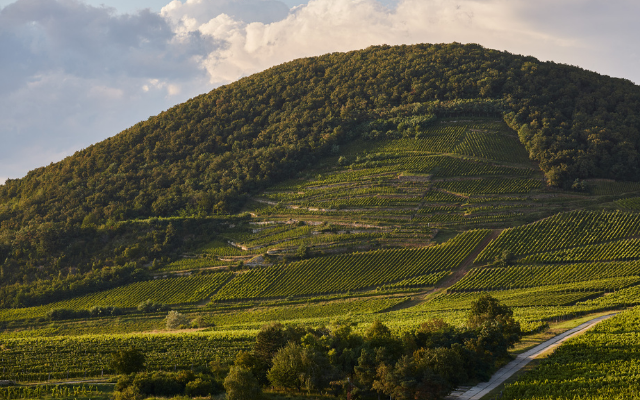 The grand old hill of Öreg Király (King’s Hill in English) had been under vines since the 13th century, when it was part of a royal estate and often referred to as a grand cru site, a well-exposed south/south-west facing slope. Károly was one of the first pioneers in the renaissance of such historic vineyards. In 2003, he began buying parcels on the slopes of Öreg Király, restoring its centuries-old stone terraces and replanting long-lost vineyards.

Károly now owns around 13.5 hectares of vineyards in and around Mád. Its stony, volcanic soils imbue the grapes with an intense minerality and a unique terroir-driven expression of the Furmint variety. Since 2009, the wines have been made and cellared in a 16th century Baroque mansion on the main street of Mád that Károly has painstakingly restored, preserving the old paintings and period features for visitors to the region as well as the local community.

Winemaker Vivien Ujvári, who joined Károly and his team in 2016, is one of Hungary’s great young talents. A Hungarian native with a degree in vineyard management and oenology, she spent several years working in wineries in Australia, New Zealand and the US before returning to focus on her love: Furmint, which she believes reaches its full potential in the terroir of Mád. 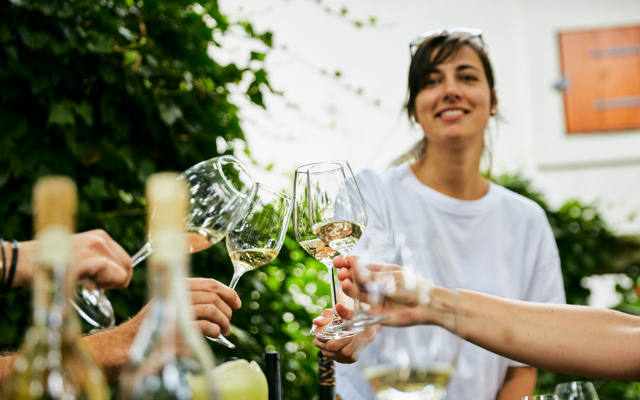 Vivi spends a huge amount of her time in the vines – ‘this is where quality is made’. The vineyards are farmed organically, and tended by hand, one by one, a necessity on the steep terraces of Öreg Király. Vivi’s aim is to create wines with a sense of purity and freshness, showing clearly but subtly the distinctive aromas, flavours and textural potential of the Furmint grape, in all its guises from dry to sweet.

We took on the Barta agency exclusively for the UK just over three years ago, after a lengthy search for the ‘right’ producer. We had been seeking a producer of a certain quality and philosophical fit, of course, and we auditioned a number of impressive contenders who ticked those boxes, tasting some excellent wines. But the great challenge was style. As a buyer at C&B for some time, I was absolutely clear on what would work for us. We were looking for Furmint’s perfume and purity and poise, but we were also looking for that special sort of tension, the magical additional dimension, that Furmint – in common with other great varieties – can achieve from special vineyards in skilled hands. We wanted a producer who would take Furmint on a tight-rope walk; a producer with the quality of vineyards, the understanding, the nerve and sheer force of will, to attempt to master that tension and capture the duality of Furmint:  its distinctive play of aromatics, the purity of fruit offset by taut minerally acids, the power and restraint. And the search led us eventually to the heart of Mád, and to Barta and its incredible Furmints. 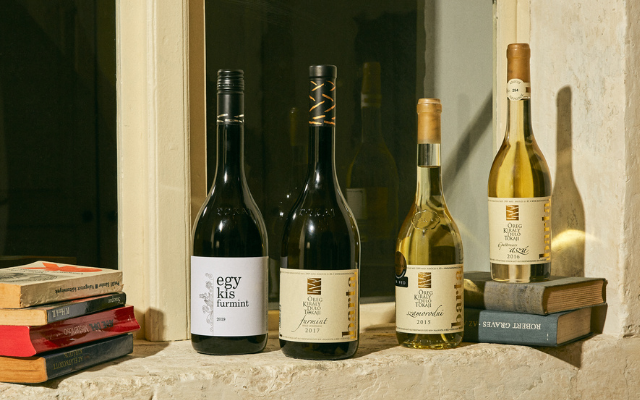 Right now, we are excited to be launching a new vintage of Öreg Király Dűlő Furmint, the 2018. Another warm vintage, similar to the 2015, this Furmint is poised and pure, with the delicate orchard fruit fragrance, mineral tension and subtle texture that first turned our heads in 2015. This wine is a fantastic step up from Egy Kis 2019, Barta’s perky junior Furmint, tangy and refreshing.

Barta’s sweet wines are equally irresistible. We still have a little stock remaining of the succulent, refreshing, late-harvest Szamorodni 2013, which gives a taste of the style and depth of Tokaji’s great sweet wines. Last but definitely not least, we have also managed to secure a few bottles of Barta’s precious Aszú, 6 puttonyos 2016. Made in minuscule quantities – 768 half-bottles, to be precise! – this extraordinary nectar scooped a Platinum award at Decanter World Wine Awards 2020.

By Rebecca Palmer – Associate Director and Buyer at Corney & Barrow