Domaine Joseph Roty is one of our favourite producers in Gevrey-Chambertin. The tiny production levels and the unassuming nature of the domaine ensure it remains tantalisingly under the radar. 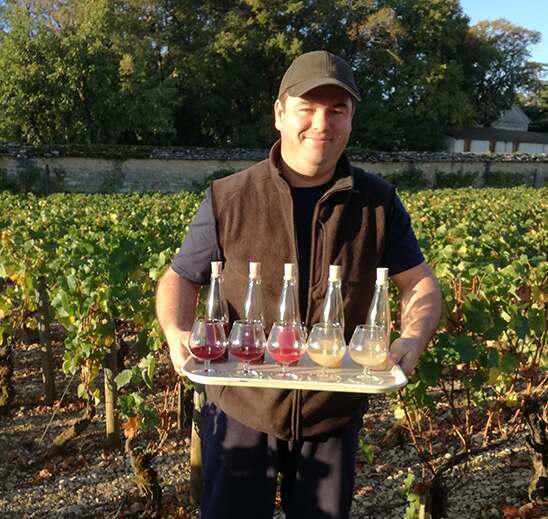 The Roty family, now in its 11th generation, was among the first to release their wines only once bottled, rather than while still in barrel – a move which many in the region are now adopting.

Based in the heart of Gevrey-Chambertin, everything about this domaine is understated. The wines range from regional Bourgogne, via Marsannay, to some of the great Gevrey grands crus.

The current incumbent is Pierre-Jean Roty, great-grandson of Charles Roty, who began domaine bottling, and son of Joseph Roty, who really set the domaine on its current course.

Joseph died in 2008 and was succeeded by his elder son Philippe, who had worked alongside him for several years. Tragically, Philippe died in 2015, aged 46, following which the mantle passed to his younger brother, Pierre-Jean.

Vineyard practices are lutte raisonée, as non-interventionist as possible. Canes are pruned to around six buds, with a naturally high proportion of small millerand berries, due in part to the age of the vines. Pierre-Jean Roty calls this approach “realistic”.

Grapes are 100% destemmed, now aided by an optical sorter. A cold pre-fermentation maceration lasts one week, following which fermentation starts naturally at 11-12˚C. The proportion of new oak is adapted to the vintage but is generally around 5-10% for regional-level wines, 30-50% for villages, 50-60% for premiers crus and 80-100% for grands crus. There is no filtration.

Our usual 8am tasting appointment with Pierre-Jean Roty was pushed back to a more civilised 9am this year, much to the relief of us all.

Pierre-Jean, Will Monroe and I were therefore in excellent spirits and started off with a general chat about the 2019 vintage.

The first point Pierre-Jean made was the warm winter and spring was followed by a cool flowering period, with some coulure (where grapes fail to develop after flowering).

This was the first blow to potential yields; the second was a dry summer, with two heatwaves.

Véraison (colour change) throughout the domaine’s holdings was early. The harvest team, which at Domaine Roty comprises up to 80 pickers, started on 20th September and worked for 6-8 days – quite a late harvest, for a warm season. Acidity levels were excellent.

The final crop was half the average size in 2019.

A Bourgogne Blanc with a difference, being 80% Pinot Blanc (planted 1990) and 20% Chardonnay. It comes from parcels in Gevrey-Chambertin and Marsannay. Vinified in used 228 litre oak barrels. White peaches, apricots, with a creamy density and a lightness of touch thanks to fresh acidity. Lemon rind and grapefruit.

This comes from three parcels in Marsannay, including Champs Saint-Étienne. Flinty-mineral, stricter and stonier than the Bourgogne Blanc, with more classical Chardonnay white peach fruit. The finish is clipped and phenolic, with salty grip on the end.

The produce of 50+ year old vines, this is made using direct pressing. Pierre-Jean Roty leaves the juice in the press for two hours at a gentle pressure, to extract the phenolics naturally. A mid-salmon colour, particularly vivid this year. Strawberry, peach and raspberry fruit, with real phenolic presence and grip. This receives 18 months’ ageing in three year-old oak barrels.

The Coteaux Bourguignons appellation dates from 2011, replacing Bourgogne Grand Ordinaire. Although Gamay is permitted, the Rotys’ wine has always been 100% Pinot Noir. The vines are over 30 years old, a parcel just below the Gevrey-Chambertin boundary, planted by Pierre-Jean’s father Joseph. Rich blackberry and forest fruits, with supple tannins and a crunchy brightness of raspberry fruit.

Although labelled Bourgogne Rouge, this comes from Marsannay, from two warm parcels, 40-60 years old, called Champforey and Leautier. Sweet ripe blackberries and red cherry fruit, managing to be both crunchy and with impressive fruit substance.

A Gevrey-Chambertin in all but name, this parcel having been within the appellation boundary until 1964. It lies across the Route Nationale from Clos Prieur-Bas. The oldest vines here date from 1925, with the youngest having been planted in 2012. Very fine dark berry perfume, with violet aromas. The palate is delicately red-fruited – cherries, raspberries and roses.

This is a blend of five parcels, comprising the domaine’s lieux-dits other than Champs Saint-Étienne (below). It should become a premier cru once the long-awaited reclassification of Marsannay happens. Cool raspberry and blackberry fruit, with a crunchy precision and a fine tannic frame. A long, detailed, perfumed finish.

The domaine is the only producer of this site. It has 18 ouvrées (around three quarters of a hectare) of Marsannay, 14 ouvrées of which are planted to Pinot Noir, the vines being over 50 years old. This is a mid-slope site. Darker and more substantial than the regular cuvée, this has greater ageing potential and a dark stony mineral perfume.

This comes from a well-sited vineyard in Brochon called Queue de Hareng. It is just beyond the Gevrey boundary, between Fixin 1er Cru La Perrière and Gevrey-Chambertin Les Évocelles, high on the slope, on the edge of the forest. The vines are around 50 years old. Dark forest fruits, with cedary spice and a sweet core of blackcurrant and fig, framed by ripely fruit-coated tannins. A cosseting, wintery wine.

The domaine’s Gevrey village is a blend of four parcels in the centre of the appellation, two from each side of the Route Nationale, accounting for 0.75 hectares in total. Blackberries and dark minerality, with fine, detailed tannins which really announce the move from Marsannay to Gevrey. Fresh, focused finish, with violets lingering.

This is a blend of five parcels across the lieu-dit, one of which borders Charmes-Chambertin. The oldest vines here were planted in 1934 and are ungrafted, on their own roots. Forceful and energetic, this is a strident wine of dark-fruited momentum and drive. Waves of pure-fruited, dark berry flavours and chalky minerality, with bitter cherries on the finish.

Planted by Pierre-Jean’s father and grandfather, La Brunelle is immediately behind the domaine buildings, a walled vineyard in the centre of the town of Gevrey-Chambertin. Being a warm, humid plot, it is always the first to be harvested. All small, millerand berries. Violets, blackberries and dark stony-mineral aromas. The palate revels in dark cherry fruit, with juicy acidity revealing an elegant, upbeat, sweetly fruited mid-palate.

Clos Prieur Bas is planted on similar soil to Charmes-Chambertin – clay and Bajocian limestone. The higher part of this vineyard, Clos Prieur Haut, is a premier cru. This lower part has deeper soils – the Rotys’ plot is at the southern end, next to the premier cru and beside the holding of Armand Rousseau. Cedary and sweet spices on the nose, with a succulent palate of sweet raspberry and blackberry fruit, framed by very supple, generous tannins. Lovely lifted, minty acidity, with a fine textural finish.

This comes from the heart of a parcel within a warm hollow, alongside the holding of Bruno Clair, making it one of the first Pinot Noir plots to be picked generally. The name Fontenys alludes to a ‘little fountain' apparently. Pure bitter cherry aromas lead into a palate of luscious dark berry fruit, lifted by fresh acidity and framed by very fine, detailed, grippy tannins.

This is the oldest of the Roty holdings, originally planted in 1881 – ‘very’ old vines indeed. It produces small millerand berries, which tend to be among the first picked. Disarmingly pure raspberry aromas, leading into a palate of sweet-fruited approachability and a sense of weightlessness, the tannins all but imperceptible. Ephemeral, as only the best Gevreys can be. Violet perfume lingers on the finish.

Never enough of this to go around, unfortunately. Sometimes spelt ‘Mazis’, the Rotys’ ‘Mazy’ is adjacent to Domaine Dugat-Py’s. A section of these vines was planted in 1919. This is focused and supremely chalky-mineral-driven on the attack, with power and fruit weight building – dark berries, some cranberry, with peonies and violets just emerging on the end. Very fine, delicate tannins. A very long-ageing wine.