Weingut Wwe. Dr. H Thanisch, Erben Thanisch in the heart of Germany's Mosel, dates back to 1636 and is currently overseen by 11th & 12th generations Sofia and Christina Thanisch.

The estate was founded in 1636, in the midst of the Thirty Years’ War which ravaged central Europe. 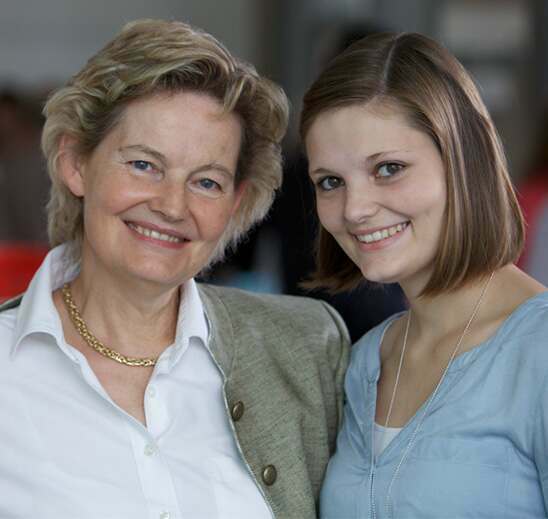 Over the following two centuries, its reputation grew steadily until, by the end of the nineteenth century, Dr Hugo Thanisch’s wines attained the highest auction prices in the region.

The grand river-front neo-Renaissance house faces the city of Bernkastel on the opposite bank. It was built in 1884 by Dr Hugo, great-grandfather to Sofia Thanisch.

Following Dr Hugo’s early death aged 42, his widow Katharina took over. This is where the prefix ‘Wwe’ comes from, short for witwe or widow, as in Weingut Wwe. Dr. H. Thanisch.

Katharina was only 29 at the time, with three young children. She went on to become a founding member of Germany’s VDP wine association.

Sofia Thanisch and her daughter Christina represent the 11th and 12th generations of the family.

Sofia and Christina are also the fourth and fifth women respectively to manage the estate, Sofia having taken over from her aunt Mechtilde in 1996.

The estate has nine hectares of vines, nestled in and around the picturesque city of Bernkastel.

The Berncasteler Doctor is a 3.21 hectare jewel overlooking Bernkastel. It is the smallest by far of the Mosel’s Grosse Lagen, the top classified sites of the region. The name was coined by Boemund II, a 14th century archbishop of Trier, for the restorative effect of its wine.

The estate has the largest holding in the Doctor. Some parcels have been in the family for over 200 years, whilst other holdings were added in 1882. The Doctor’s south-southwest aspect and vertiginous 60-70% gradient maximise sun exposure. Its vines average over 60 years of age.

Adjacent to the Doctor, Bernkasteler Badstube* is named after historic communal bathhouses, public bathing having been imported by returning crusaders. There can be an approachable generosity of fruit here, whilst the fine slate soils make for wines of racy acidity and long ageing potential.

The estate is sustainable, reserving the right to spray if needed. The vines are largely ungrafted.