YOU HAVE TO AGREE TO THE USE OF COOKIES TO BE ABLE TO PURCHASE AS A GUEST.
Bordeaux, Fine Wine, Producers, Tastings

This tasting was a little while in the making, it was something I’ve wanted to do for some time. A conversation with the unique (word used properly) Francois Mitjavile while tasting the 2016s back in April and the seed was sown with the man that matters most. I must at this point say that Nina, Francois’ daughter, is heavily involved at Roc de Cambes and has been for 10years or so.

Why was I so keen to do this tasting? Well, a few reasons:

I recently did a write up for the Gentleman’s Journal which gives a little more insight to the estate itself and then you can see the Offers of 2008 to 2016  for further info. For even better stuff (he was obviously listening) and a whole different write up of this tasting you must read what good egg and superb writer (feeling the pressure myself) Joss has done here – Vinolent on Roc de Cambes. There’s a small post on a bottle of Roc that Joss and I shared at Zucca (wipes tear from eye) here. 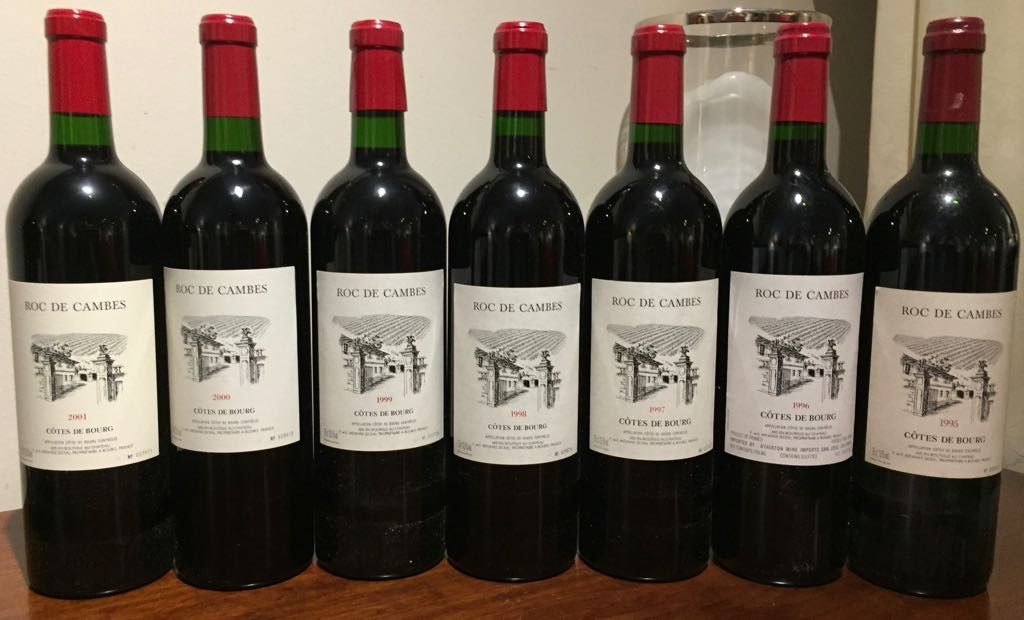 So to the tasting which for reasons of division was in three flights of seven. None of the wines were decanted, Francois is not a fan of decanting.

Roc de Cambes 1996 – A tiny bit of mint, with iron and other ferrous flavours behind, relatively delicate but with more body than the 1995, good wine.

Roc de Cambes 1997 – Degraded with a naughtily decadent nose, mellow cheesecloth, so ready, so incredibly moreish and drinkable. Fascinating yet easily enjoyable. Has no right to be this good. Defines the Roc character of over-performance.

Roc de Cambes 1998 – A little bell pepper, slightly austere, even a little more serious. I like it but it is harder work than others.

Roc de Cambes 1999 – A little bit of bacon fat, really quite hedonistic which is not usually a “1999” characteristic, delicious, quite rich, good acidity, love it!

Roc de Cambes 2001 – Rich but lifted with a decadent freshness, superbly difficult to articulate, drive, poise even a bit of swagger. An exciting wine. First class. 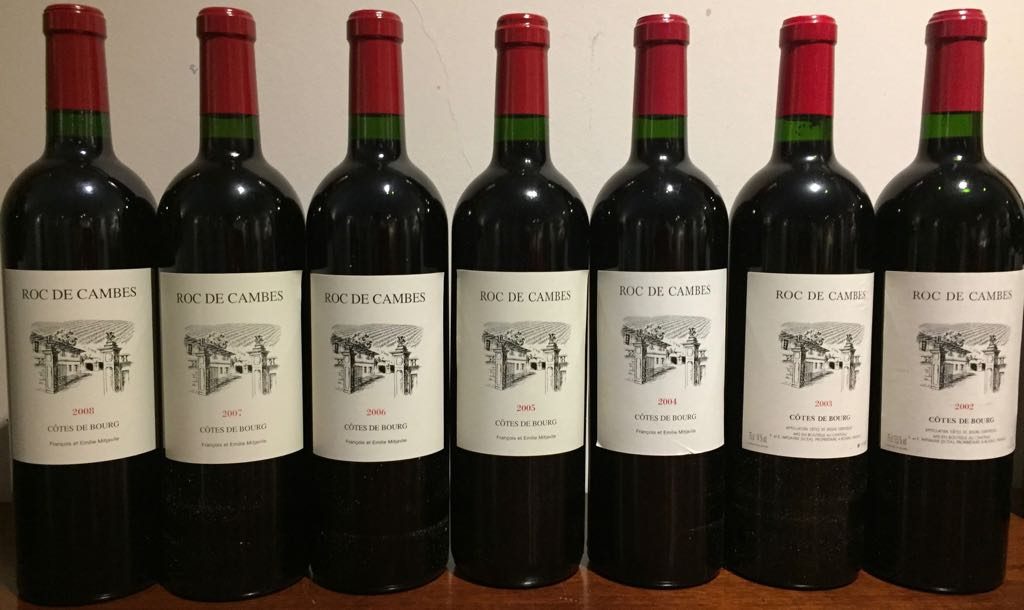 Roc de Cambes 2002 – Nice, if simple, nose, palate is good, more succulent, some flesh, it sort of creeps up on you as it is an introvert wine. Good.

Roc de Cambes 2003 – Sweet leather and a little more high-toned, exotic even, delicious, good balance and a nice energy. I had this again yesterday for lunch and as a bottle to drink (ok share) it is superb.

Roc de Cambes 2004 – A nose with a whiff of wet steak that reminds me of great brunello. This is very together, no edges, good life, spot on now for me. Super.

Roc de Cambes 2005 – A wine I know well and drink almost too often. Full balance, a bit of everything on show, less serious than 2000 but better for that. Quite primary, to my taste the perfect moment is probably 2-3 years away. A really exciting wine.

Roc de Cambes 2006 – Just starting to move beyond the primary. A definite spice to things here, good texture. Palate has a character that should move towards a more savoury profile. Good.

Roc de Cambes 2007 – A more delicate wine, more feminine, lovely freshness and elegance. A wine that is on its acidity. Redder fruit. The perfect brunchtime Roc.

Roc de Cambes 2008 – Quite compact now, tight and a shade muted, a little like the 2006 but with a little more lift on the palate. Good from now onwards. Very good. 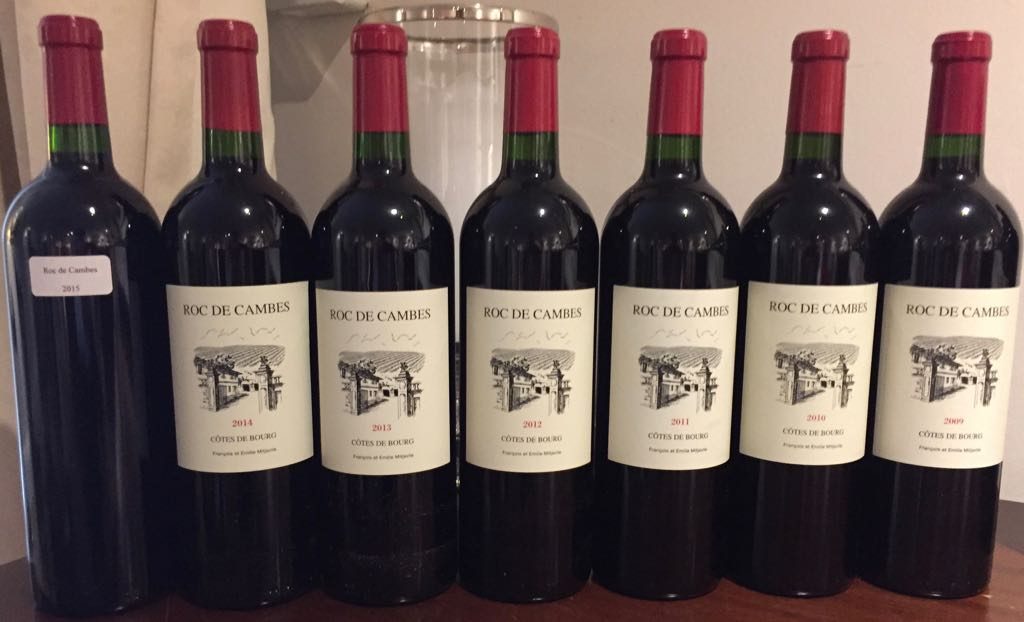 Roc de Cambes 2009 – A more exotic nose, this is everything a 2009 should be, open, full, expressive and extrovert. The fruit is a sweet red and black compote, so energetic but dense at the same time. A joy. If you own it you should not miss a bottle or two now. Epic.

Roc de Cambes 2011 – Ripeness, a dry degradation as well, one of the best 2011s I know of. Some leather (sweet) and secondary notes. A good choice for complexity now.

Roc de Cambes 2012 – I am loving a lot of 2012s now, this is gorgeously fruited, some of the intensity of fruit of 2009 but more mellow. A delightful drink. Another vintage where owners should not miss trying a bottle soon. Delicious texture. Special.

Roc de Cambes 2014 – The word that most springs to mind here is – completeness. Maybe a shade more on the red fruit side, it is mellow and somehow manages to be rather ageless, blind this could be a anything form 2005 onwards, this just means balance. Exciting.

Roc de Cambes 2015 – The nearest in style to the 2009, so fruited and with lovely decadence, as with so many here this has a massive drinking window. Manages to do the very difficult thing of combining ripeness and moreishness. Brilliant.

The 2015 was a sample but near enough to the bottling to be included here. All the wines came either from the estate or from reserves i.e. they had not moved other that coming from the estate to the UK. I tasted the 2016 during en primeur and it is very exciting possibly reminding me of the 2001 or 2014 the most.

In looking back at why I was so excited – I remain just as excited if not a shade more. I often find high expectation can be a curse. Roc de Cambes in contrast is a blessing of a wine.