“Historically small yields… the lowest of the post-war years. These very challenging conditions gave birth to juices of such brilliant quality, which do better than merely console us: they entice!” – Michiel Tardieu

Corney & Barrow started working with Tardieu-Laurent in 2002, just six years after this family operation was established. Michel and Bastien Tardieu are négociants-éleveurs, meaning they rely on a patchwork of longstanding relationships with small growers the length of the Rhône valley.

Although the grapes come from a 300 km corridor, stretching from Côte-Rôtie in the north to Bandol in the south, the wines are all vinified in Tardieu-Laurent’s impressive modern facility in Lourmarin, which sits among the rolling hills of Provence. One of the most distractingly beautiful settings in which to make a living: I don’t know how Michel and Bastien get any work done at all. 2017 was a year of low, low volumes in the Rhône, unlike Burgundy to the north, which saw its first good-sized crop since 2009. As explained in the Vintage Notes section, the reasons for this were mainly a cool spring and a very hot summer. The reds are gratifyingly ageworthy, combining substantial natural extract, in the south in particular, with tannic finesse and very pretty perfume. The whites are delectable, veering towards the heart-on-sleeve demonstrative end of the spectrum, with taut acidity safeguarding their harmony.
The Tardieus have secured a couple of new suppliers this year (which seems astonishing in a year of such low yields). They have also produced a Vieilles Vignes Côte-Rôtie for the first time, thanks to some very exciting over 60 year-old parcels in Landonne and Lancement – prime Côte-Rôtie real estate. However trite it sounds, this is an offer in which there really is something for everyone, both stylistically and price-wise. 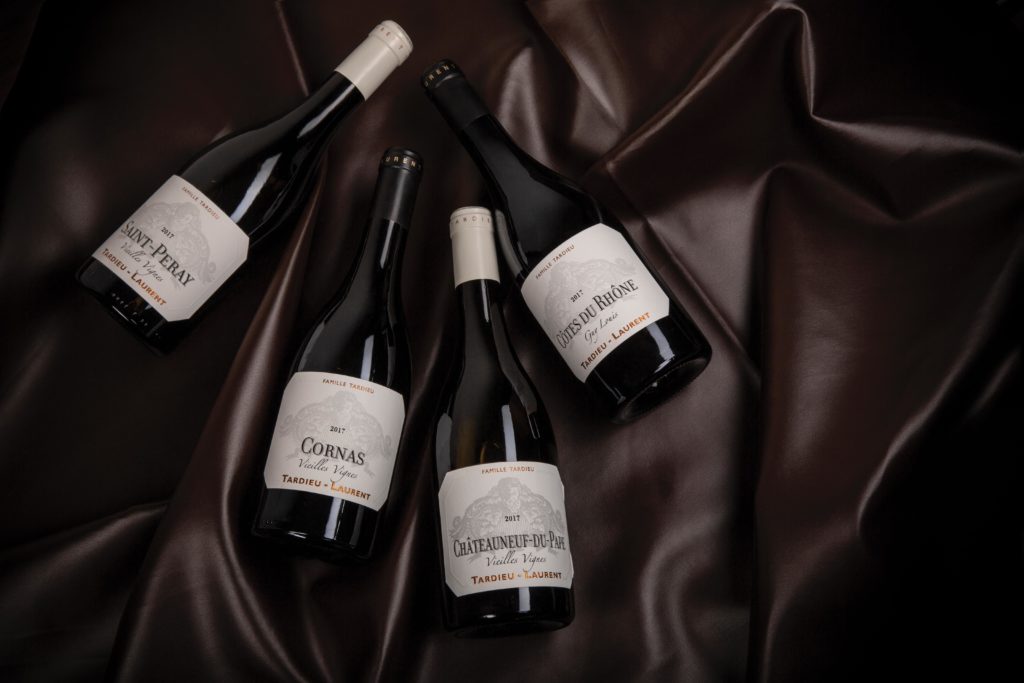 “A very warm year. Thanks to the tiny volumes, we achieved excellent ripeness.” – Bastien Tardieu

2017 in the Rhône valley was marked by what Michel Tardieu calls “a succession of definitely adverse events”. An abnormally cool spring enabled frost to affect flowering, with the notoriously sensitive Grenache being particularly hard-hit. This “cruel spring” was followed by a very dry summer, meaning yields are tiny. The positive outcome was that the vines had “naturally little load” and so reacted magnificently to the summer warmth.
A year of climatic extremes in the southern Rhône has made for a vintage in which old vine Grenache has thrived, playing to Tardieu-Laurent’s strengths, given the advanced age of many of the vines here. The wines are perfumed and aromatically delicate, with wonderfully fine tannins.

The northern Rhône 2017s are deeply coloured, with lots of natural body. Michel speaks of long, careful élevage being key to tempering the “natural opulence of a somewhat ostentatious vintage”, remarking that these will be very long-lived wines. The Tardieus’ Condrieu is 40% of its usual quantity this year but brims with vitality. In a year of scant volumes, you might fear for the prospects of a négociant-éleveur such as Tardieu-Laurent, who depends on others for ‘raw materials’. Michel’s comment on this was that, “Fortunately, we were able to count on the sincere, even friendly, relationship that we have built, year after year, with each of our vine-growing partners. They should be most sincerely thanked for this.”

As for winemaking, there is a tendency towards foudres rather than barrels: Michel and Bastien like the elegance these larger vessels give. The white Hermitage, for example, is now entirely vinified in foudre, from the high-quality Austrian cooper Stockinger. Slightly fewer whole bunches have been used this year compared to 2016. Elsewhere, the winemaking remains as traditionally hands-off as ever.