Ahead of this month’s release of the latest vintages, Head of Fine Wine, Will Hargrove recounts two vertical tastings with Hyde de Villaine’s winemaker Stephane Viver over Skype.

Hyde de Villaine owes its name to the coming together of two great names in the wine world: Larry Hyde, celebrated Californian viticulturist and Aubert de Villaine, best known as co-gérant of Domaine de la Romanée-Conti. Aubert’s wife Pamela is Larry Hyde’s cousin. The estate as a whole, across it’s five wines, only makes 4000 cases. For more information, the estate’s own website is a particularly good one, especially the interactive map.

This first Skype-tasting was of one particular wine from the estate – Belle Cousine – a wine named in honour of Pamela de Villaine, Larry Hyde’s cousin and Aubert’s wife. This wine takes advantage of the cooler Carneros climate, where Merlot thrives; blended with Cabernet Sauvignon, Merlot, picked earlier, provides the core of the blend. 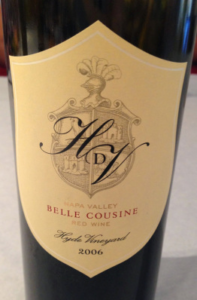 2007: 14.5%, 60% Merlot – 40% Cabernet Sauvignon. A stressful and cool growing season with a tiny crop. Lovely complex nose, real balance, much more mellow than the 2006, very complete with a lovely persistent but not angular texture, reminded me a little of Dominus, impressive. 18/20

2008: 14.5%, 60% Merlot – 40% Cabernet Sauvignon. The 2008 growing season was marked by extremes. The coldest spring since 1970. The Hyde Vineyard’s proximity to the San Pablo Bay certainly diminished the impact of this cold weather. 2008 was the second year of a drought that led to smaller clusters and berries therefore bringing an increased concentration. The wine is very open and expressive, more red fruit character, more feminine and at the she time slightly less ripe. I like this, a good nervousness. 17/20

2009: 14.5%, 60% Merlot – 40% Cabernet Sauvignon. The 2009 winter was dry through until rains in the early part of spring. Bud break was later than usual avoiding any risk of frost damage, from there mild weather created a long, slow ripening vintage leading to wines of balance but no lack of concentration. I really liked this, an elegance and a little drier, more herbal, lighter notes in general a little leather and cedar, elegantly complex. A definite buy. 18.5/20 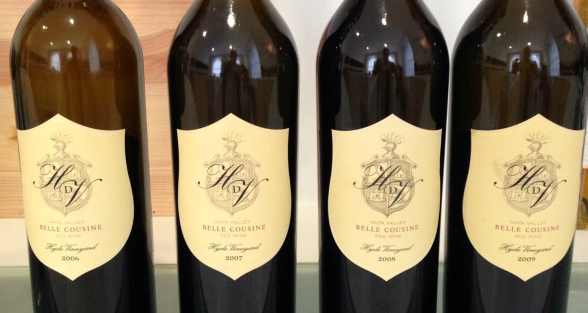 I think what struck me about these wines was the very welcome vintage variation – the 2007 and 2009 were more my style, the 2006 and 2008 possibly more what people expect of Napa. There is a lovely balance and the wines will I believe age very well, especially the 2007 and 2009 with their balance.

When the chance came round to do a second Skype Master Class tasting with Stephane Vivier, I was very keen. This time, the topic was Chardonnay.

This specific tasting covered the 2010-2013 vintages. The wines are made in a lovely blend of styles between the Californian and Burgundian. This is not to say they aim to make Burgundy in California but they interpret things that way. For those who fear big and oaky Chardonnay there is no need to worry – this only sees one year in barrel, of which only 20% is new (the rest is mix of 2nd, 3rd and 4th fill), before 3 months in stainless steel prior to bottling. The Chardonnay comes from 10 different parcels which are in turn from 5 distinct blocks. The vast majority was planted in 1979. The site is 35-40 miles from the bay and typically sees fog in the mornings. There is a small amount, only 5%, of a “second” Chardonnay released as “De La Guerra Chardonnay”. So, to the wines:

2010: The second and third weeks in September saw quite a heat spike in what had already been a warm vintage. The wine exhibits an oily richness, some brioche, full, quite rounded and opulent, perfect now but no mad rush. 17+

2011: No heat spike here, the latest picked of all the Chardonnays they have made, October the 4th. Cool, lovely minerality, citrus, some saline too, white fruits and a splendid long finish. 18

2013: The 2013 vintage is, climatically, the very best since 1974 with richness from a good amount of drought, just the right amount of stress you see, cool ripeness and great acidity. This has an easy citrus backbone, expressive yet streamlined at the same time. Difficult not to drink it now but will repay patience very well. Very impressive. 18-18.5(+) 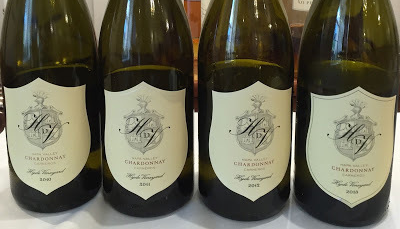 On this last point Stephane remarked how the wines age superbly, clearly he is biased, but a recent tasting at the estate went back to the early 2000s and all the wines were in great shape.

I have always loved showing these two wines, the Chardonnay and Merlot/Cab blend Belle Cousine blind and will continue to do so. Superb wines at prices that compete with anywhere else in the world.

Would love to go and visit some day…