Barossa Boy: Paying Tribute to the Vines and the Generations of Barossa Winemakers

A sixth generation Barossa winemaker, Trent Burge grew up in and on Barossa soil. Riding trail bikes around the vineyards, playing local cricket and footy, he had dirt under his nails and Barossa blood in his veins. Barossa Boy is Trent’s way of telling the story of his life and to pay tribute to the generations of winemakers before him. 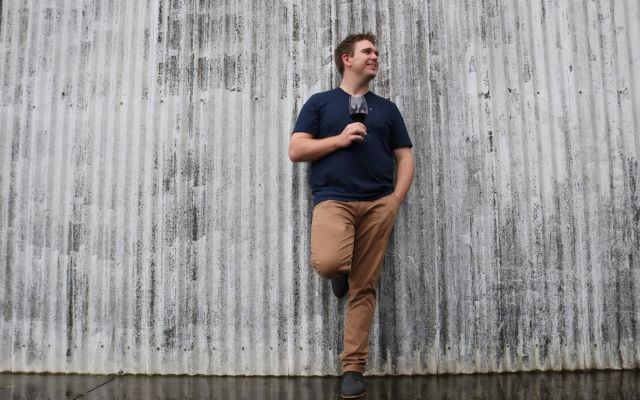 Q: When did your family start making wine?

My great-great-great grandfather John Burge immigrated to South Australia in 1855 and started making fortified wines in the Barossa. Every generation since has followed in his footsteps. I’m the sixth generation and I want to put a spin on our wines. We have always had our finger in it and it’s time to show what the Barossa is all about.

Q: What was it like growing up in the vineyards?

Born and raised in the Barossa, I worked my way up through the ranks in the wine trade. I spent 6 years in the cellar and a couple more years in the vineyards before going into production planning with my father. I like to tell people I had done a wine apprenticeship to understand the roots, the soils, and what the grapes look like on the vines and how to grow them. It’s my turn to create my vision of the Barossa and what I think the Barossa can do for me and our generation.

Q: What is the inspiration behind Barossa Boy?

Barossa Boy is inspired by different chapters of my life and that’s how each of them got their name. We want to put our wines in a light that makes them easy for the consumer to understand. It’s about being a brand that people can relate to. It’s a personal brand and we like to show what’s behind the scene and we don’t hide behind anything. That is our integrity and we need to make sure our stories, history and heritage are being told in an authentic way. If you line up the five wines, the labels actually flow into each other to tell the story of my life. 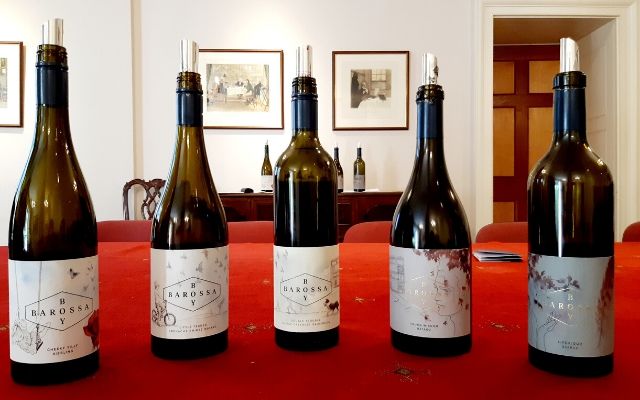 I have a picture in my mind of having six wines in the Barossa Boy range. At the moment, we have five and the newest one is called Cheeky Tilly, an Eden Valley Riesling. This is the first white wine in our range and it’s named after our first daughter, Tilly.

The Riesling is fresh, upbeat, vibrant and lively, a bit like her. Apart from the little girl on the swing, there is a rose on the label because her middle name is Margaret Rose – in dedication to my mom and my wife’s grandmother. I hope Tilly is going to excited to hear this story when she is older. My wife and I have done everything to make sure that when Tilly is older she will be proud of the wine just as much as we are. 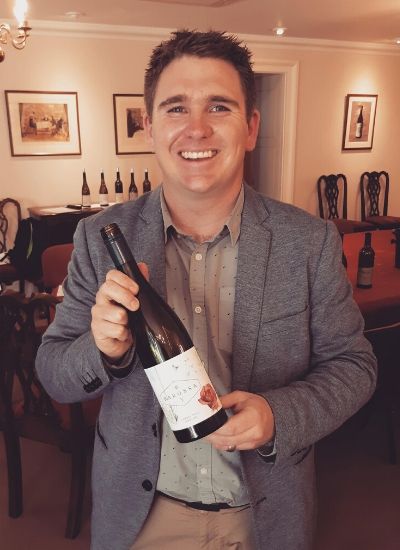 Our first red wine is called Little Tacker made from the three traditional grape varieties of the Barossa (Grenache, Shiraz and Mataro). We created this for consumers who are new to wines as you can really taste the flavours of the fruits. It’s built like a little tacker, which is an Australian slang for a young, cheeky fun boy who gets himself in a mischief. I want to tell the story about how I grew up in the Barossa like a little tacker. That’s why there is a little boy on the label, riding bikes around the vineyard. There is also a cricket game in the background as it is a big part of my life. 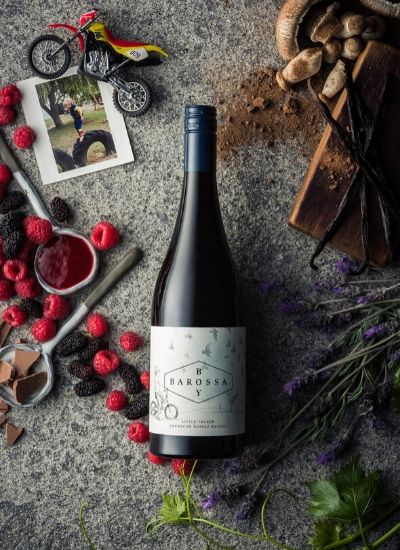 Double Trouble is about taking the next step in my life as an adult. This wine is more robust with bigger favours and new oak. It’s balanced and focused. The story behind this wine is about the things I love in life. The best Shiraz comes from the Barossa and the best Cabernet comes from Eden Valley. So I used the two varieties from the two regions to make a wine that depicts Australia. The double decker bus on the label is me coming to the UK to play cricket and going back to the Barossa to make wines. Finally, the dog on here is called Dex, and it’s about us going around the vineyard creating a bit of double trouble ourselves. 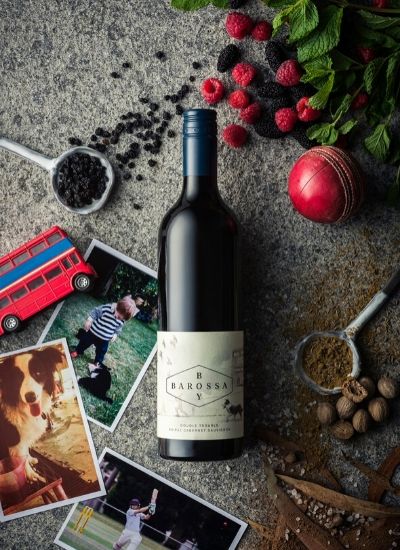 Young Wisdom is probably the main reason I started Barossa Boy. When my parents sold the bigger business we had, there was a part of the vineyard that wasn’t really in use. So I asked them if I could take some Shiraz and Mataro to build my own brand. 2016 was a great year for Mataro and I wanted to show it off on its own.

The story of this wine is about how lucky we are to have these 85-year-old old vines. They have seen many summers, rains and droughts – more than I have in my lifetime. It’s a dedication to the vines and showcasing this variety that doesn’t get shown often. Originally, I wanted to call it ‘Backbone’ as I see it as the backbone of the Barossa. It’s the grape they blend into other wines to build structure and flavours. In the end I chose ‘Young Wisdom’ as I am the young winemaker using the wiser old vines to turn it into something new. 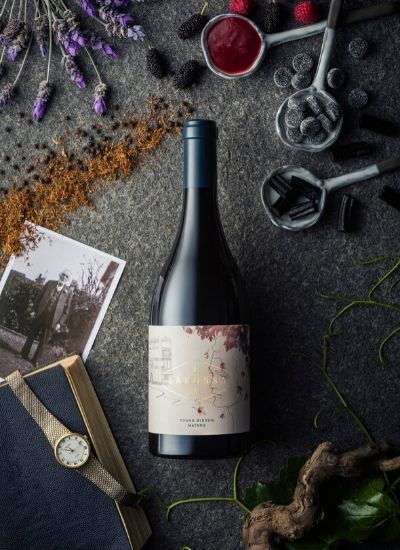 Lifeblood is a dedication to the generations before me and my way of paying hommage to my favourite variety in the Barossa. We were lucky that my family has quite a nice cellar and we would go down there at Christmas to pull out old vintages of wine and see how they have progressed since they were first made. I wanted to tell the story about the generations that have come before us who have worked really hard to build the Barossa name. I don’t want to just sit back and let it go through the motions. I want to help the Barossa grows. That’s why this wine is more of a traditional style. It’s big and rich and in your face as a young wine.

The thing about the Barossa wine is that it ages really gracefully because of the tannin structure. That’s why there is a quill on the label. I like to tell people that I am the sixth generation and that wines flow in our veins and we can write our stories with Shiraz as blood. 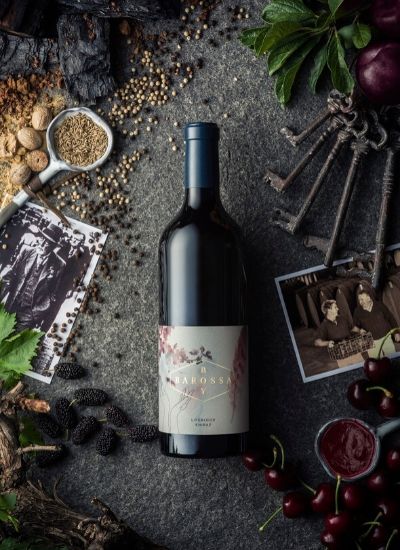 Q: So what is next for Barossa Boy?

There are two red wines and one white wine in my entry level and icon range. We are still developing the last white wine, which will be a high-end Eden Valley Chardonnay. As a grape, Chardonnay has been dissed in Australia because there were a lot of overly oaked wines in the 90s. For me, Barossa Boy is about keeping balance and drinkability and I’m still looking for the right fruit.

Q: What are you looking forward to during your UK visit?

Barossa Boy has only been selling in the UK for 15 months but we’ve had a good year. Now it’s time to understand what we can do to continue that growth. As a brand, we are fresh and vibrant but there is a seriousness behind it, too. No one can tell the story better than me going out there meeting clients and understanding what their needs are.

Q: What has it been like working with Corney & Barrow?

It’s been fantastic. The team at Corney & Barrow has really taken our brand in. Barossa Boy is not an easy sell and so it’s great working with people who love the brand as much as I do. My life is all about being part of the team. For a brand like us, we really have to get behind it and show it off as best as possible. That’s why I want to come over here every year to understand what I can do to help you. It’s been great that people are relating to our stories and loving the brand as much as I do!