“I do not make Beaujolais. I make Moulin-à-Vent.”

Established in 1850, Domaine Labruyère consists of 14 hectares of vines, all in the Moulin-à Vent appellation. We have represented the domaine as exclusive UK agent since the 2013 vintage. As I seem to say on a regular basis, these are stunning, age-worthy wines which not only represent a pinnacle of what is happening in the region, but also offer some of the best value in the world of fine wine. If you are a lover of Burgundy or sensitively made northern Rhône… or indeed of top quality Beaujolais, these wines are for you.

In 1850, Jean-Marie Labruyère bought ten hectares of vines around Les Thorins, a hamlet in the Romanèche-Thorins commune of the Saône-et-Loire department. 150 years later, the family acquired Le Clos du Moulin-à-Vent. It is the sole monopole in the region and lies beside the iconic windmill. Édouard Labruyère, who grew up at the estate, is the seventh generation to run it. Édouard took over in 2008 and together with winemaker Nadine Gublin and viticulturalist Michel Rovere, has continued to shepherd an estate which is both a Moulin-à-Vent superstar and a shining example of just what the Gamay grape is capable of. 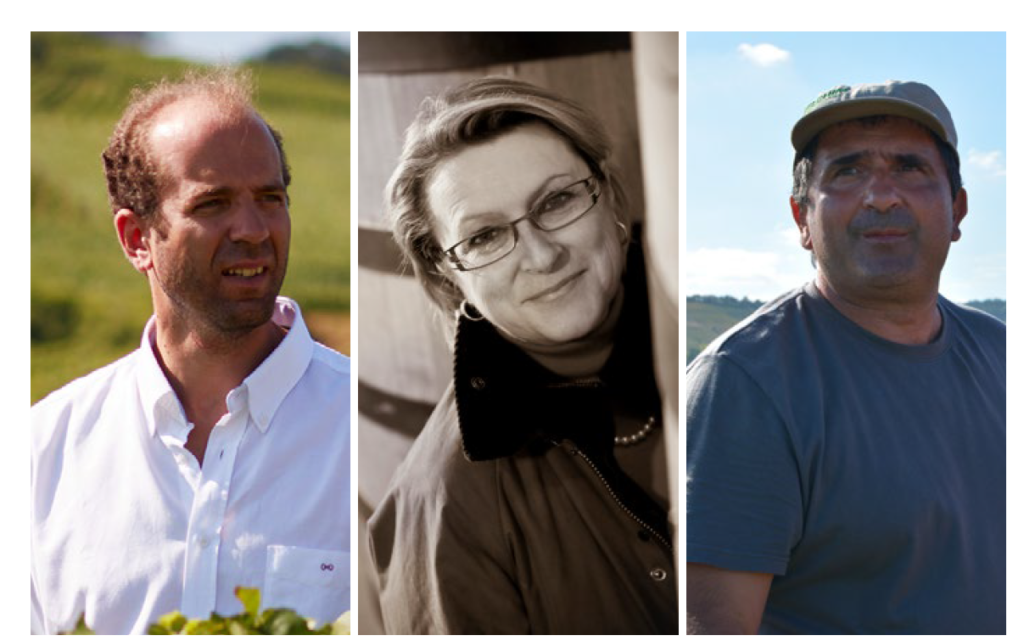 Édouard Labruyère was born in 1976 at the original family domaine in Moulin-à-Vent, Beaujolais. Following a short period as a diplomat in Africa, he returned to the world of wine in 2003, working as a courtier in Bordeaux from 2003 until 2008. He has run the family wine estates since 2008.

Nadine Gublin has been head winemaker at Domaine Labruyère since 1990. After a decade at the domaine, she was named ‘Winemaker of the Year’ by the Revue de Vin de France, the only French woman to have been so recognised. Nadine describes her approach as “sustainable viticulture, precise winemaking and optimal ripeness”.

Michel Rovere is Chef de Culture and Chef de Cave at Domaine Labruyère. Born in Mâcon, Michel has lived all his life in Romanèche Thorins, in the heart of Moulin-à-Vent. He joined Domaine Labruyère in 1984 at the age of 18 and has stayed with the family ever since.

All vineyard work is done manually, with horses used for ploughing. Vines are spur-pruned and trained in the traditional gobelet style, which means cutting them back almost to the vine-head during the winter (making the vine look a little like a goblet). The vines are short, restricting yields. This also means the grapes are low to the ground, the reflected heat affording some protection from frost but the humidity bringing a risk of fungal disease.

There is no rush to harvest here, Michel Rovere being content to wait as long as it takes for sugar and phenolic maturity. Whilst the appellation permits 52 hectolitres per hectare (hl/ha), Domaine Labruyère’s yields fall between 22 and 35 hl/ha.

Édouard is very clear that he runs the domaine with future generations in mind. Viticulture is ‘sustainable’, avoiding chemical treatments wherever possible, but without being certified organic. Édouard notes that under this regime, both bunches and berries have become smaller, giving a greater ratio of grape skins to juice, and therefore more tannic structure. Added to the limited yields, the result is wines of heightened texture and concentration. 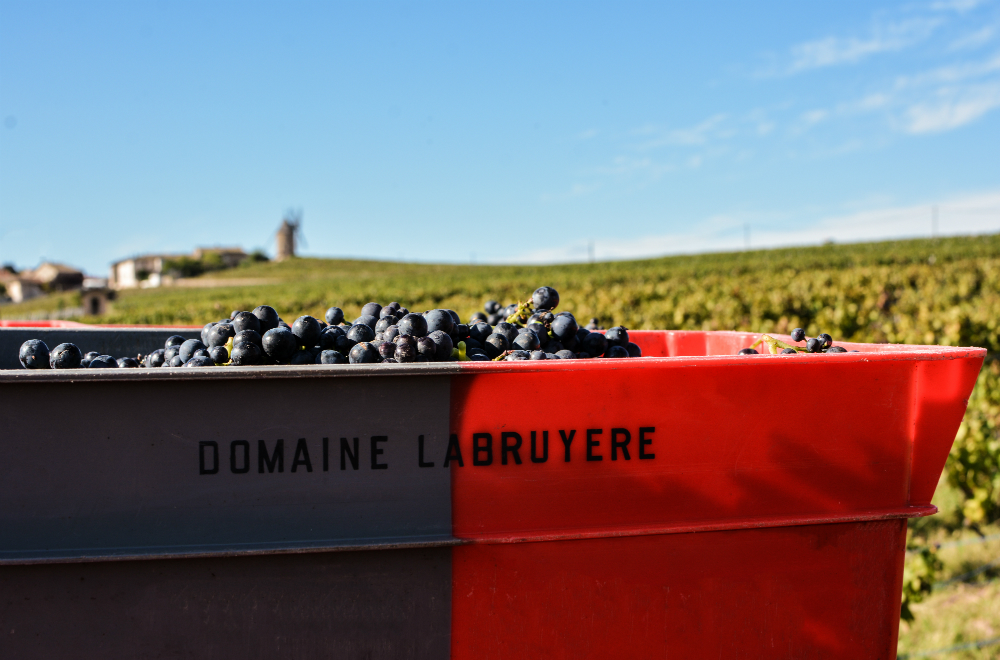 Hand-picked Gamay grapes arrive in the cellar for a double sorting, to ensure optimum quality. The grapes were historically 100% destemmed, but Édouard and Nadine have in recent vintages increased the proportion of whole bunch fermentation.

This past aversion to stems possibly comes from a desire to distance the domaine from the method of carbonic maceration for which Beaujolais became infamous at the peak of the 1980s Beaujolais Nouveau fad. Whilst whole bunches are used in carbonic maceration, this is where the similarity ends. Nadine goes to pains to point out that the domaine has never used and will never use this winemaking style which is synonymous with light bodied, bubblegummy, early drinking wines. Indeed, Domaine Labruyère is the polar opposite of these things – the wines are deeply coloured, with richly sculpted palates and a decade – plus of ageing potential.

Fermentation is temperature-controlled and the wines are matured in oak, increasingly in large-format 600 litre oak demi-muids. New oak is below 5% for Coeur de Terroirs, with a maximum of 10% for Champ de Cour and Le Carquelin. Le Clos is the only exclusively barrel-aged wine; its proportion of new oak varies with the vintage. The second-hand 228 litre pièces come from Domaine Jacques Prieur in Burgundy. Winemaking errs towards the reductive, protecting the juice from oxygen with very limited racking. The wines are transferred to concrete vats pre-bottling.

After a cold, dry January, February and March were mild, 2.5°C above average, and with normal rainfall levels. This clement weather saw bud-burst arrive early, a full ten days earlier than in 2016, between 30th March and 3rd April.

Vine growth was fast, aided by mild temperatures which continued through the first half of April, lack of rain notwithstanding. As in 2016 however, a subsequent sudden cooling slowed development.

After a cool first ten days of May, temperatures began to rise, accompanied by significant rainfall (more than double the norm). Month-end was very hot (4.4°C above average), a little rainy but mostly sunny.

Flowering began early, on 28th May, culminating around 2nd June, amid slightly-above normal temperatures. These flowering dates are early, close to those of 2015, and a good fortnight ahead of last year. The rest of June was very hot and dry, with about half the normal rainfall.

The month of July continued in a similar vein, the first half of the month seeing temperatures 2.1°C above average and 44% of normal rainfall. Some storms arrived in the second half of July, at which point véraison started (24th-28th July). The season remained ahead of average, close to 2014, maintaining a fortnight’s lead on 2016.

August conformed to the average at first and then became very hot, 3.6°C over the mean, and dry. The only exceptions were heavy thunderstorms during the last two days of the month, which caused temperatures to drop.

September was cooler: ideal for harvest. Picking started at Domaine Labruyère on 5th September: Champ de Cour was harvested on 6th and 7th September, Carquelin on the 7th and 8th and Le Clos last, as befits its majestic style, on the 12th.

Interested? View all tasting notes for the 2017 vintage here. 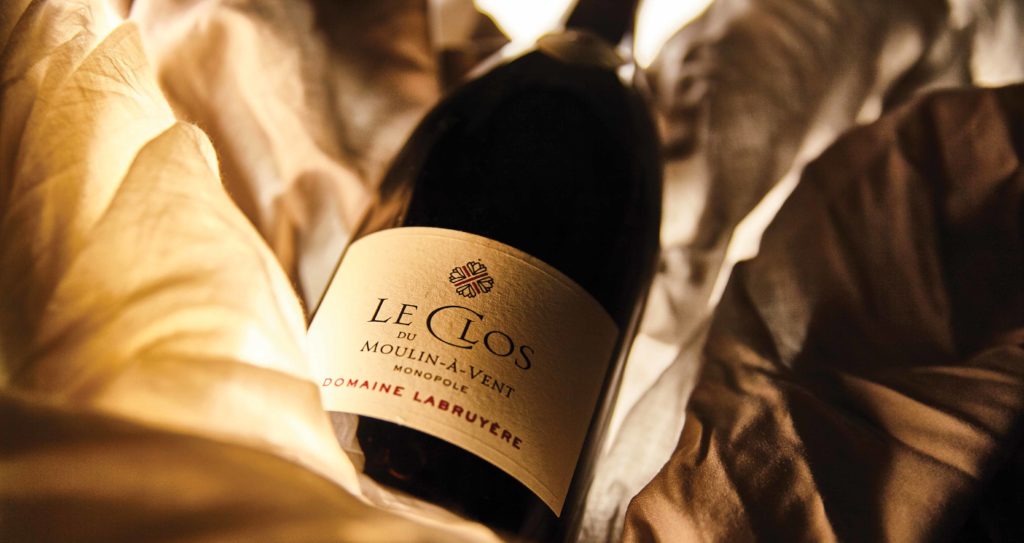