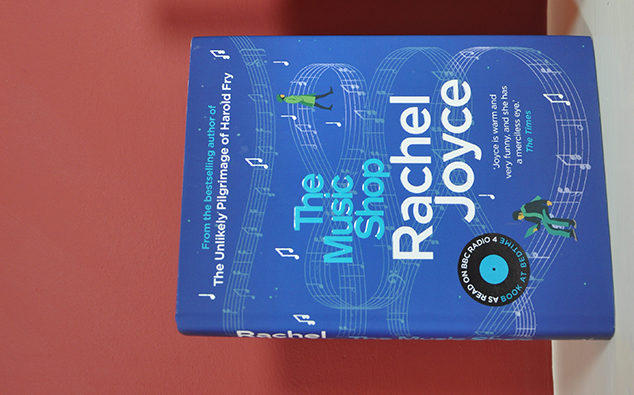 Cheltenham hosts the world’s oldest literature festival but it’s far from stuffy. After last year’s hit Book & Bottle Salon with Lionel Shriver they invited us back to find a #NovelPairing for The Music Shop by Rachel Joyce who joined me on stage at The Daffodil with Rebecca Palmer from Corney & Barrow. 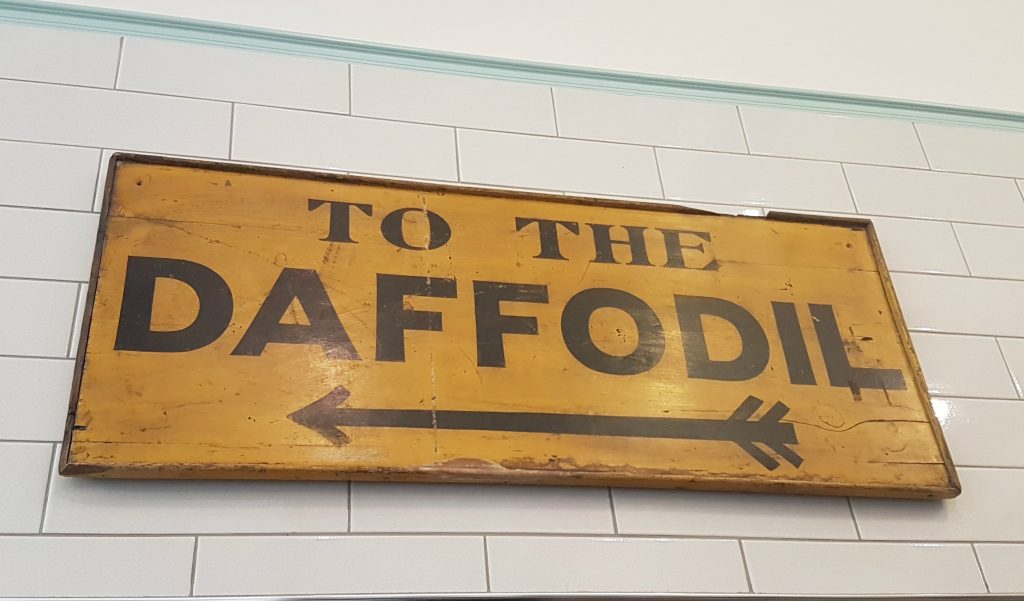 The novel is full of rich, deep characters and brims with backstory – it’s told in the present as well as flashbacks to Frank’s childhood with his eccentric music-loving mother Peg. It’s funny and sad. Unusually, it features almost no drinking. In fact, the only mentions of drinking come from Father Anthony who was an alcoholic. Frank came to Father Anthony’s aid by prescribing Miles Davis.
So, a real challenge for Rebecca Palmer from Corney & Barrow who was devising our shortlist. “Father Anthony says: ‘you listened to me and then you found me jazz…You just listened to me and then you got up and found the record I needed.’ So, I just listened to this gorgeous novel and the three wines became clear. Something generous but unexpected, something upright and German and something rich with a story.”
Supremely literary rather than simply literal. 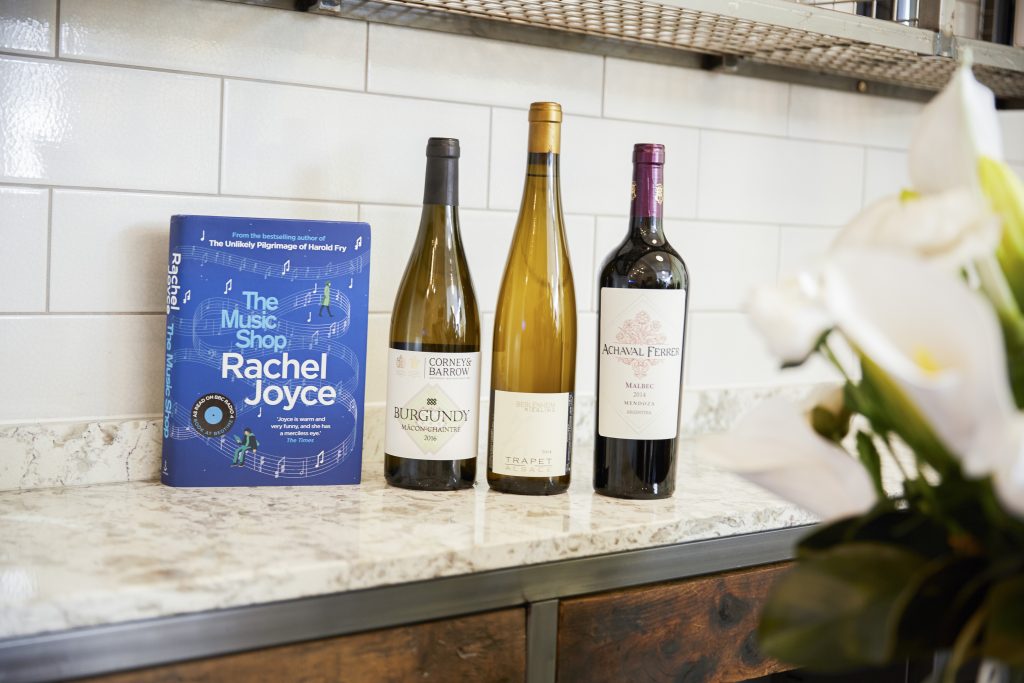 First up is the Corney & Barrow White Burgundy Domaine Dominique Cornin 2016. After a deep sniff Rachel takes a taste: “It’s so much richer than it smells!” Indeed, it is and this despite having had no time in oak. “Like the novel, this is essentially gentle at least on the surface,” says Rebecca. And it’s 100% chardonnay which surprises our Cheltenham audience. I’ve always been a huge fan of white burgundy because it balances richness and lightness. If I was choosing the #NovelPairing it would be this but we’re giving Rachel all the power for this pick!

The young woman who faints outside Frank’s shop is Ilse Brauchman. “This actually happened to me,” says Rachel. “I was trying to think of how to introduce Ilse when someone knocked at my front door and said, ‘you know there’s a dead lady outside your house’. I went out and this woman was just lying there. I went over to her and touched her and she came to and got up and left. That was Ilse.”
“Ilse has to be a Riesling surely,” says Rebecca. “She’s German and precise and firm but dynamic and shows great vulnerability which becomes more evident as the book unfolds.” Riesling, which ranges from bone dry to syrupy sweet, divides every room. Sure enough, this Riesling Beblenheim Domaine Trapet 2014 gets the fewest audience votes but those who love it really, really, love it. For me, it’s a well-structured and characterful but reflects just one character not the whole book.

“I’ve recently got into orange wine,” says Rachel. “It tastes dusty somehow and makes the front of my mouth move forward. It’s delicious.” And very trendy and almost as divisive as Riesling—to me orange wine tastes like sweat. But they have a great story, being one of the first wines invented and being buried for months in great amphorae.

“Sometimes you can taste the story of a wine,” says Rebecca. Definitely true of her final shortlisted wine: Malbec Achaval-Ferrer from Argentina. “When Frank tells Ilse that the depth of Beethoven’s Moonlight Sonata comes from a place of suffering you can hear it. The vines that makes this wine have also suffered. The vines, discovered halfway up a mountain in Mendoza by Roberto Cipresso, were gnarled old things bent double and half-broken on the ground but still producing just a few grapes. Grapes of such amazing concentration that Roberto bought the vineyard there and then. It takes 3 vines to make one bottle.” What presence this wine has—not tannin but full-on fruit, dark berries with a bright magenta edge. I love it and so does Rachel and so does our audience. “It’s got a sort of Aretha-like richness and depth,” says Rachel. “And soul and texture and I am just in love with that story. Suffering makes great music which can help alleviate the listener’s suffering. This wine is so generous and warm, I have to choose it. Frank would love it.”

And so, Malbec Achaval-Ferrer 2014 is Rachel Joyce’s #NovelPairing for her charming novel The Music Shop.
R-E-S-P-E-C-T! 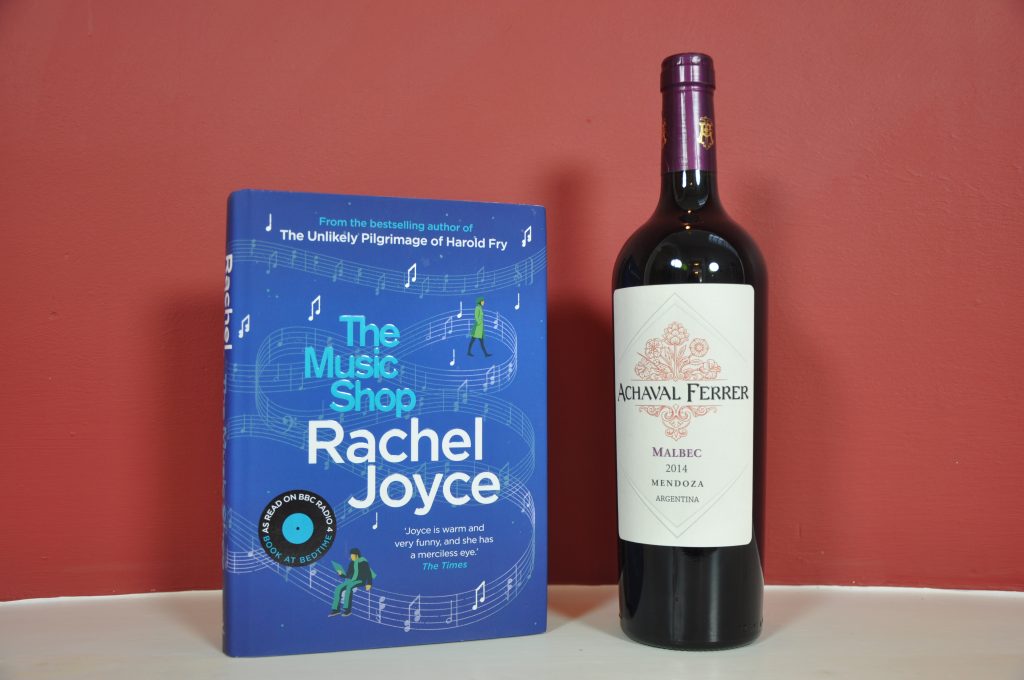