2021 Releases
Exclusive to Corney & Barrow in the UK

Hyde de Villaine is a union of two great wine families, a meeting of the best of Napa and Burgundy. 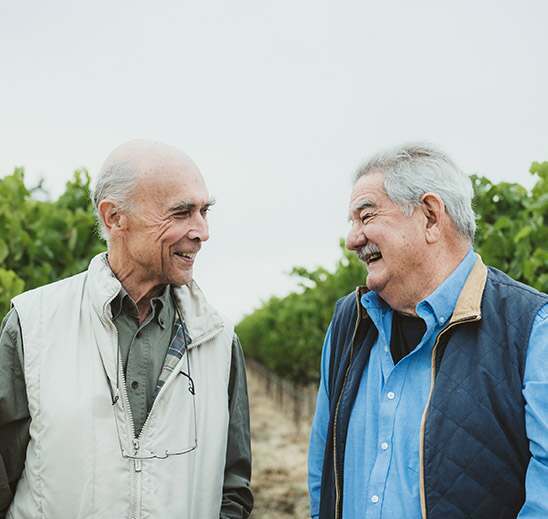 Its enviable foothold in Carneros, at the southern end of the Napa valley, was made possible by Californian viticulturist Larry Hyde (pictured right opposite), of Napa’s famous Hyde Vineyards.

When this collaboration was established, in 2000, HdV (as it is known for short) was given the pick of Hyde Vineyards’ 156 acres (63 hectares). 19 acres (7.7ha) were chosen, which today provide the fruit for Belle Cousine (a Bordeaux blend), Californio (a Syrah, yes with an ‘o’), the Ygnacia Pinot Noir and the two Chardonnays. The sixth wine, Ysabel, is a Sonoma Pinot Noir.

The remainder of Hyde Vineyards’ production is sourced by many of Napa’s hallowed names, such as Kistler and Ramey – some 40 clients in all, with as many again on a waiting list.

The WinesMore about the producer

As always, this year’s releases span three vintages. These are 2017 for the ‘Californio’ Syrah and Belle Cousine, 2018 for the Pinot Noirs and the HDV Chardonnay, and 2019 for Le Début, the younger vines Chardonnay.

As HdV’s James Eyer puts it, “The 2017 vintage will always be remembered.” This was a year in which harvest was swiftly followed by wildfires. The wines were fortunately spared the devastation visited on the area. A year of high quality reds, exemplified by HdV’s Belle Cousine and ‘Californio’ Syrah.

Winter 2016-17 was wet and cold, allowing the vines to rest after the productive 2016. Bud break occurred in March, amid fluctuating temperatures – frigid nights and generally warm days, with some rain during the early stages of flowering. These conditions resulted in a low, uneven fruit set.

A warm, dry summer culminated in two major heatwaves in early September, which caused the vines to shut down and ripeness and acidity levels to flatline for the next three weeks. In late September, the vines came back to life and gave one last push, resulting in wines of harmony and freshness.

Harvest started in the third week of August, finishing by the first week of October, just before fire scorched through Napa and Sonoma counties.

A gentle season, making for wines of aroma and elegance. A vintage particularly suited to Pinot Noir in fact, which is fortunate given this year’s offer!

February saw abundant rains, followed by generous sunlight in spring and early summer. Both bud break and flowering occurred slightly late, but under ideal weather conditions, making for a plentiful and even fruit set.

An exciting vintage of balance, concentration, and purity of flavours, focused by fresh acidity.

A dry start to winter was followed by heavy rains, which lasted into early spring. The late rains resulted in high vegetative vigour, a lower-than-average fruit set and generally challenging viticultural conditions.

However, summer came up trumps with exceptional weather – cool, blanketing fog in the mornings followed by warm sunny afternoons. These optimal conditions made for a lengthy growing season, allowing the fruit to slowly ripen and preserve the finesse and freshness of the vintage.

Carneros spans the southern end of both Napa and Sonoma counties, benefitting from warmth from the north and the cooling influences of the misty San Pablo Bay.

Phylloxera decimated the vineyards of Carneros in the late 1900s and Prohibition slowed the recovery. By the 1970s, there was growing recognition of a typicity of style and in the 1980s, planting accelerated.

Carneros nestles in the low hills of the Macayamas mountains. Although the majority is in Sonoma, the wines may be labelled as Sonoma or Napa AVA (American Viticultural Area).

Proximity to San Pablo Bay is key, the fogs and coastal breezes, channelled through the Petaluma Gap, providing a cooling influence and allowing for a prolonged growing season. Carneros won AVA status in its own right in 1983.

HdV’s wines are from a near-contiguous series of plots within Hyde Vineyards, on gently rolling hills, facing southeast.

The Chardonnay and Syrah are planted on shallow, loamy soils over ancient alluvial terraces and hard clay. The Merlot and Cabernet are clustered at the northern end of the vineyard, further from the cooling fog of the bay, the better to ripen. The soils are deeper here too and the south-east slopes are steeper.

The Pinot Noir for Ysabel, comes from a joint venture with Van der Kamp Vineyards, planted on Mount Sonoma, above the temperature inversion layer at around 1400 feet (427m) elevation – above the level of Sonoma’s morning fogs. Cooler earlier in the day than Hyde Vineyards, the fruit matures around two weeks later, with a consequently later harvest.

The temperate Carneros climate prolongs the growing season, allowing the vines to steadily build intensity and complexity whilst retaining acidity. Drainage is helped by ancient creek beds which lie between the topsoil and the clay pan. Enough moisture is generally retained to make irrigation unnecessary. 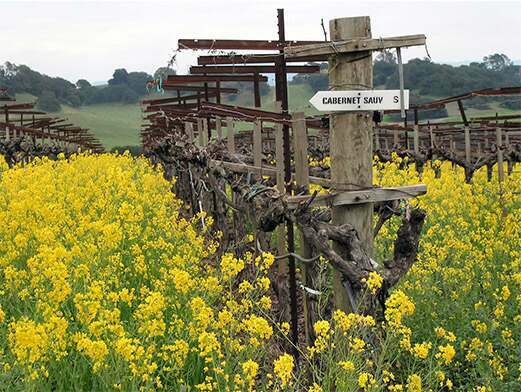 Belle Cousine, named after Larry Hyde’s cousin Pamela de Villaine, is a Bordeaux blend – 60% Merlot and 40% Cabernet Sauvignon. It is made from 2.4 hectares of vines with an age range between 15 and 30+ years. As for all the reds, it is unfiltered and unfined.

60% Merlot and 40% Cabernet Sauvignon. Picked 12th September (Merlot) and 12th October (Cabernet). Aged for 21 months in 20% new French oak. Inky dark cassis aromas, with plush strawberry, mint and tomato leaf above – a classic Bordeaux blend. The palate is packed with flavour and energy, plump raspberry and fresh mint buoyed on a wave of acidity and then grounded by the more serious flinty minerality and tannic rigour of the Cabernet. A joyous, life affirming wine. 14% abv.

Not a spelling mistake but the name given to early California settlers, of Spanish descendancy, who ventured to the Wild West. Despite the Californian name, the European heritage of HdV is the inspiration here: the aim is site typicity whilst capturing the Syrah grape’s beguiling aromatics.

Californio is made from 0.8 hectares of south-southeast facing vines aged 17 to 23 years. Picked in two passes, on 19th September and 2nd October. The different batches were aged separately for around five months before blending, with 18 months’ ageing in 20% new French oak. The aromas here have that beguiling Syrah mix of plush dark berry fruit and spicy pepper. The palate is resonantly pure and fine on the entry, the cool blackberry flavours channelled by supple tannins and clipped acidity. An invitingly flavoursome wine, light on its feet. 13.5% abv.

Good things come to those who wait – but it really was a long wait for HdV’s first Pinot Noir. Now we have two: one from Sonoma, the other from Napa’s Hyde Vineyard.

These 2018s were fascinating to taste side-by-side, the cool, bright cranberry character of Sonoma’s Ysabel contrasting with the darker cherry and earthy minerality of Napa’s Ygnacia. Vosne-Romanée and Gevrey-Chambertin respectively, perhaps…?

Ygnacia, from Napa's Hyde Vineyard, is made from just 0.7 hectares of eight year-old vines, facing south. The soil is clay loam over dense clay pan. Picked on 3rd September. Aged for 17 months in 15% new oak. The aromas here are darker-fruited than the Ysabel Pinot, with bitter cherry and blackberry. Fine earthy minerality too. The darkly berried palate is strident, driving and ferrous, with very fine, detailed tannins. 13% abv.

For many the pinnacle of HdV, Chardonnay is a grape that lends itself effortlessly to a Franco-Californian collaboration. These are proudly rooted in their home soils and climate whilst retaining enviable acidity and attaining new levels of elegance with each vintage.

Formerly named de la Guerra, after the Spanish crest which still adorns HdV’s labels. These are the young Chardonnay vines, just 9 years old on average. Soils are shallow loam over clay pan. Picked 11th and 13th September. Aged for 13 months in 80% neutral French oak and 20% concrete egg. Aromas of ripe white peach and playful cookies and cream, a crowd-pleasing nose. The palate has an ingratiating sucrosity of fruit on the attack, coming into focus on the mid-palate with impressively precise flavours of green melon and lemon rind. The finish is salty and granular, revealing this wine’s serious credentials. 13.5% abv.

HdV’s flagship Chardonnay comes from the older blocks of Hyde Vineyard, vines of between 27 and 39 years of age, planted with Old Wente and Calera clones. Picked over a long window from 5th - 27th September. Aged for 14 months in French oak barrels, 20% new. Aromas of ripe white peach, apricot and cedar – super classical. The palate has profound, almost chewable stone-fruit, with a touch of honeysuckle, making for a substantial wine of presence and – thanks to its beautiful arc of acidity – succulence. This hits the sweet spot between definition and enjoyment, exactly as it intends to. Superlative Californian Chardonnay. 13.5% abv.

From 40 year old vines, Old Wente clone Chardonnay is planted on shallow loam over clay hardpan, facing south by southeast. A mere 0.3 hectares in size, so quantities are tiny. It has been singled out as it is the only remaining original planting in Hyde Vineyard. Ripe white peach and flinty struck-match minerality on the nose. The palate has a notch more dry extract than the HDV Chardonnay, which takes charge of the mid-palate rather magnificently, shaping it and, once the (pristine) fruit recedes, leaving a granular salty residue, a wonderful sort of essence of old Napa Chardonnay. Buy this if you can, fabulous. 13% abv.