Domaine Leflaive – Some 2014s & Dinner at the Ritz

I was delighted to visit Domaine Leflaive back in October and taste the Domaine Leflaive 2015s… it was a super tasting. This post, as the title suggests, covers a tasting at C&B HQ of some of the 2014s and then a dinner at The Ritz. On both occasions Brice de La Morandiere spoke passionately but also with no lack of self-deprecation “everything I say is only relevant to white wine made by Domaine Leflaive” being a typical-enough sound bite. To accompany the 2014s have a look at this (produced by the Domaine) Information on the 2014 vintage at Domaine Leflaive.

We started the tasting with the Mâcon-Verzé 2014, amazingly this is already the eleventh vintage of this wine. The 2004 has been drunk a couple of times recently and shows that this a can be a serious wine as well as a wonderful earlier drinker. I am happy to go out on a limb and say the 2014 is the best yet and I am delighted to have tucked a few magnums away. Good opulence, some savoury notes and even a bit of my beloved saline. Best from now to 2020 but I am sure this will go beyond.

Bourgogne Blanc 2014, with the Mâcon-Verzé joining the line up, I drink this far less often that I used to. There is a lovely toastiness (though a tiny, 10% ish, amount of new oak is used), it is as generous as it is serious. The palate is a little more serious and tight. Leave a few years then enjoy!

Meursault 1er Cru Sous le dos d’Ane 2014 – The Pinot (under which this was a Blagny) was pulled out in 1996 (25%) and 2004 (75%). The site is just above Meursault 1er Cru Perrieres and the wine is one I like a great deal. There is a danger that it would be a Puligny made in the Meursault (there are too many of these in my book) but this is proper. Good, more opulent fruit, good acidity and all the pieces in the right order but always a reminder that this is a hedonistic Cru. Difficult not to just enjoy it now.

Puligny-Montrachet Villages 2014 – Citrus and piercing acidity this is a very “zippy” wine, fine and focused, almost Chablis-esque in it’s purity. Possibly following the Meursault exaggerates this. Leave a little while.

Puligny-Montrachet 1er Cru Pucelles 2014 – “A dialogue wine” to quote Brice. Undoubtedly the iconic Puligny of the Domaine. When I think Leflaive I think of Pucelles and Chevalier. This is an intensely mineral wine, the hidden richness is apparent but the lazer-like drive and focus is superb. This is the wine equivalent of a 1-iron off the deck on a cold morning (that may mean nothing to you!). Seriously impressive and very exciting to own.

Batard-Montrachet Grand Cru 2014 – I have always loved Batard, there always seems to be a little more shoulder, a little more masculine. If Pucelles or Chevalier is a dancer or a fencer then this is an old school outside center, nibble but stout. There is a line here to the Bourgogne Blanc for me, a toastiness. This is complex, full, grippy and almost gregarious.

This tasting and the Clavoillon 2014 below left a very great impression on me. White 2014s have not lacked hype but every bit of it seems justified on this sort of showing. 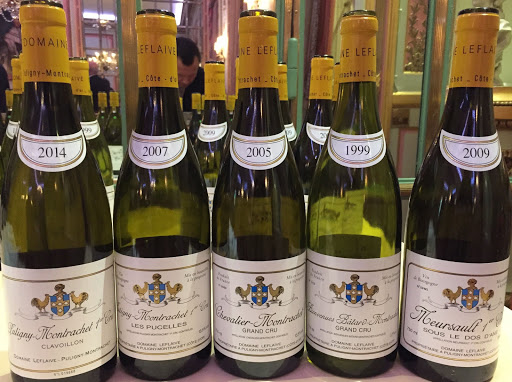 They do it well at the Ritz, it might from the outside seem a unambitious venue but the service works, they never understaff things, the food is good and the rooms are on the right side of OTT. We had a nice simple but very well executed menu of…

Seabass with Fruits of the Sea

Mâcon-Verzé 2014 kicked off proceedings again in the same style. As we were seated the next pairing was poured – Puligny-Montrachet 1er Cru Clavoillon 2014 & Puligny-Montrachet 1er Cru Les Pucelles 2007. The Clavoillon was a real star, so expressive yet still wound up tight. Clavoillon has been on the up and up for some time now, to my mind it really hit the heights with the 2010 and is now rivaling some of the other 1er Crus here. The Pucelles was a little variable from bottle to bottle, out table got pretty lucky it had richness and a just starting to mature feel.

Next we were into the “Grand Cru” zone with two gems. Bienvenues-Bâtard-Montrachet Grand Cru 1999 & Chevalier-Montrachet Grand Cru 2005. The Leflaive 1999s have always been stunning when I have had them and  I know there are several people who share my love for the BBM ’99. The trademark “struck-match” of a few years ago is just fading (or maybe the word should be “resolving”) now and there is complete, elegant maturity to this. A lovely element of saline balances a little dash of that Grand Cru “honey”. The Chevalier by contrast is a weightier wine and one in a much earlier stage of it’s life too. This is dense, almost brooding. Good now, for sure, but with a lot to come I feel. The pairing worked really well.

Lastly we had the Meursault 1er Cru Sous le Dos d ’Âne 2009 with cheese. Richer whites being a better foil for cheese than almost anything! I have said, or written, in other posts that I really think 2009 whites have been under-rated, those that picked properly (early!) have made some lovely wines. There is a parallel to 2015 that is hard to ignore.

One of the great Domaines in good hands! Onwards!