“My recommendation is to open a bottle at dinner and drink it for breakfast… if I am really nice to my friends, I open a bottle in the morning.”

Among the most famous white wines of Burgundy, Domaine Leflaive is enjoying new leadership, with Brice de La Morandière at the helm.

The Domaine dates back to 1717, with founder Joseph Leflaive but recent history owes a tremendous debt to his grand-daughter Anne-Claude Leflaive, who was manager from 1994 until her untimely death in 2015. Brice is Anne-Claude’s nephew and great grandson of Joseph. Domaine Leflaive is a standard bearer for Anne-Claude’s passionately held views on biodynamic cultivation. This philosophy has, at its heart, the individual treatment of vines by plant-based compounds, according to a strict timetable governed by the lunar cycle, allied to a total ban on systemic chemical treatments and insecticides.

Biodynamic experiments at Domaine Leflaive started in the early nineties with the disciplines being fully endorsed from 1997. The prime motivation initially was Anne-Claude’s concern about the sustainability of the land but the rewards have extended far beyond the vineyards, which have thrived under the regime. There were remarkable quality improvements in the finished wines – a welcome, unintended and totally unexpected bonus.

We arrived at Domaine Leflaive’s new barrel cellar in the evening, as dusk was falling on the quiet streets of Puligny-Montrachet. Brice de La Morandière was waiting for us, sitting on a bench in the cellar’s small courtyard, which was a picture of tranquillity.

It is rather magical tasting in a deserted, dimly lit cellar. We assembled in a loose semi-circle at the end of a row of barrels: Brice, Régisseur Pierre Vincent, Adam, Will Monroe and I. This is Pierre Vincent’s first full vintage at the helm of the Domaine’s winemaking. He is rightly mindful of the weight of history here, but seems refreshingly open to innovation. The Domaine has made some not-insignificant changes over the past few years, including moving to Diam technical corks, as of the 2014 vintage. The challenge here was to put to bed definitively the spectre of so-called premature oxidation that, as Brice quite openly acknowledges, has for a couple of decades now hung over many producers, most visibly, although not exclusively, of white Burgundy.

In 2015, a new press and new decanting tanks were purchased. Recent cellar innovations include separate handling of the press juice and totally revised racking and bottling processes. As of the 2014 vintage, all shipments have used e-Provenance® technology to record temperature and humidity during transport. As for fraud prevention, since the 2011 vintage, each bottle has contained a unique Prooftag® security code, enabling customers to verify their authenticity on the Domaine’s website, www.leflaive.fr. 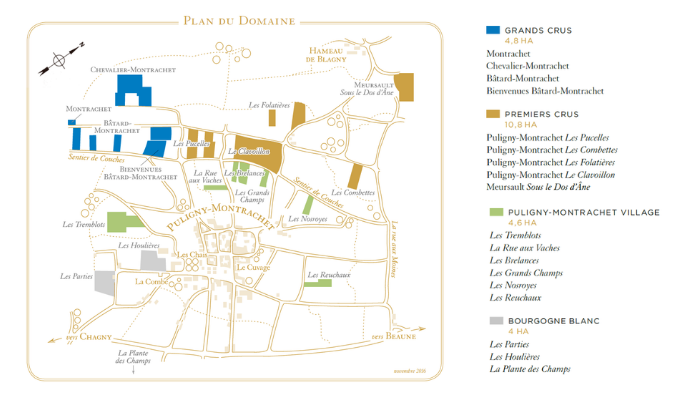 “Our family philosophy is to respect the great terroirs, to show humility towards the forces of nature and to be rigorous in our relentless pursuit of excellence in winemaking.”

Anyway, back to the tasting. We started with the Mâcon-Verzé and its two new single-vineyard cuvées, offered herein, Le Monté and Les Chênes. This is a forward-looking move by the Domaine – the Mâconnais is already etching itself into the awareness of serious wine buyers and by isolating two top plots, the intricacies of the terroir have become fascinatingly visible. The Domaine’s Bourgogne Blanc is, as Adam points out in his tasting note, a Puligny-Montrachet by anyone else’s standard, the grapes coming from within the village. The Puligny-Montrachet Villages is, of course, a step up in both concentration and finesse and indeed it is only by comparison that one understands why the Bourgonge Blanc is labelled as such.

The premiers crus are where you begin to see the astonishing complexity that is wrought from such a small patch of hillside vineyards. The brain surgeon Henry Marsh (Do No Harm: Stories of Life, Death and Brain Surgery) has written that the idea that “thought itself… should consist of jelly, is simply too strange to understand.” I find it similarly amazing that this muddy hillside can, by some alchemy, produce the most sublime and varied liquid.

Every year, to a greater or lesser extent, the vineyards’ personalities emerge phoenix-like from the soil: the flamboyant, strutting Folatières, the depth and majesty of Combettes and the laser-like brilliance of Pucelles. And then there are the grands crus. With a touch of the self-effacing, Brice recently told a group of customers, “I often sit looking at Chevalier-Montrachet, as it’s the only thing I do really well…”.

Here again, the characters are clear to see, never more so, it seems, than in this most transparent of vintages. The earthbound realism of Bienvenues. The rotund, joyful good nature of clay-heavy Bâtard. The electric, nervy tension of limestone-rich Chevalier, sitting high on the slope, above Le Montrachet itself. After the frost-ravaged 2016, yields are ‘correct’ in 2017, as they say in Burgundy, without excess. The effects of the warm, dry summer – a little too dry in July – were moderated by gentle August rains, easing the grapes into a tantalisingly perfect maturity. It is tempting to find parrels of the 2014 vintage in the elegance, concentration and precision of these wonderful wines.

More than anything perhaps, 2017 is a vintage in which terroir shows itself to the very best effect. That magic ingredient, which Burgundy does better than anyone, is the sense of communion with the earth, light and air from which its wines are wrought. I came away from our evening tasting at the Domaine feeling that it is this aspect of profound immediacy which is particularly visible this year. And if that is not the sign of an exciting vintage, I don’t know what is. 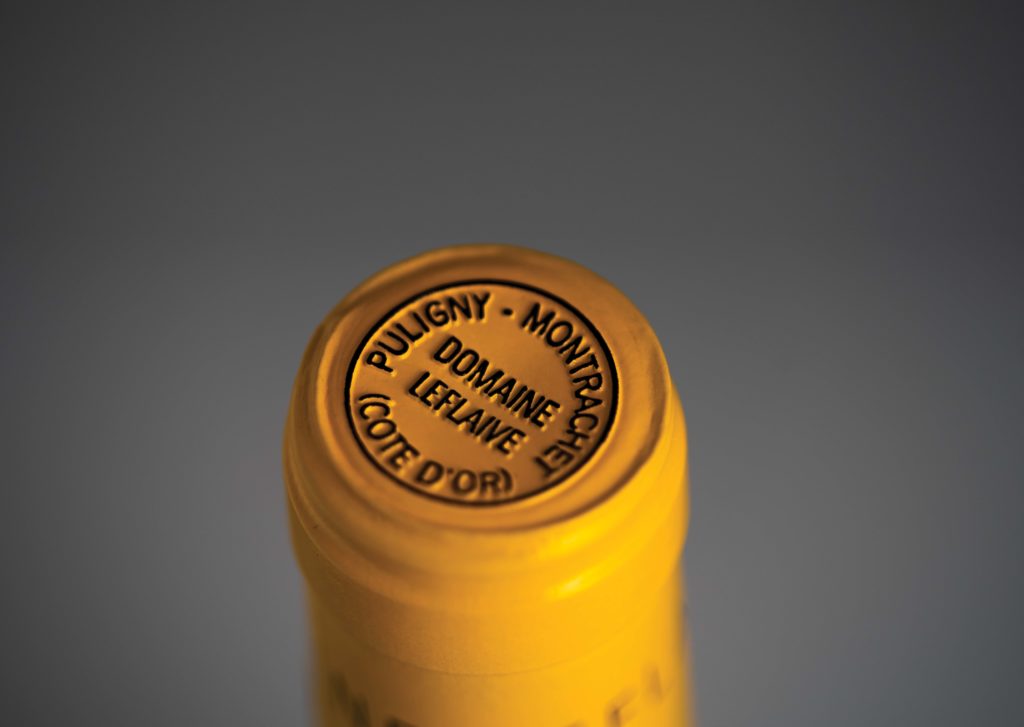